The Wood Badge training is a Scouting leadership program for adult leaders in the programs of Scout associations around the world. Wood Badge courses aim to make Scouters better leaders by teaching advanced leadership skills, and by creating a bond and commitment to the Scout movement. Courses generally have a combined classroom and practical outdoors-based phase followed by a Wood Badge ticket, also project, phase. By "working the ticket", participants put their newly gained experience into practice to attain ticket goals aiding the Scouting movement. The first Wood Badge training was organized by Francis "Skipper" Gidney and lectured at by Robert Baden-Powell and others at Gilwell Park (United Kingdom) in September 1919. Wood Badge training has since spread across the world with international variations.

On completion of the course, participants are awarded the Wood Badge beads to recognize significant achievement in leadership and direct service to young people. Recipients of the Wood Badge are known as Wood Badgers or Gilwellians. 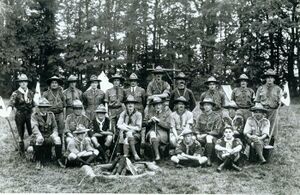 Soon after founding the Scout movement, Robert Baden-Powell saw the need for leader training. Early Scoutmaster training camps were held in London in 1910, and in Yorkshire in 1911. Baden-Powell wanted his training to be as practical as possible, and that meant holding it in the outdoors in camp. World War I delayed the development of leader training, so the first formal Wood Badge course was not offered until 1919.[1][2][3] Gilwell Park, just outside of London, was purchased specifically to provide a venue for the course and was opened for use on June 2, 1919. Francis Gidney, the first Camp Chief at Gilwell Park, conducted the first Wood Badge course there from September 8 to September 19, 1919. It was produced by Percy Everett, the Commissioner of Training, and Baden-Powell himself gave lectures. The course was attended by 18 participants, and other lecturers. After this first course, Wood Badge training continued at Gilwell Park, and it became the home of leadership training in the Scout movement.[4]

Generally, a Wood Badge course consists of classroom work, outdoor training, and the Wood Badge "ticket" or "project". Classroom and outdoor training are often combined and taught together, and occur over one or more weeks or weekends. As part of completing this portion of the course, participants must write their tickets.

The training includes both theoretical and experiential learning. All course participants are introduced to 1st Gilwell Scout group or Gilwell Scout Troop 1, and assigned to one of the traditional Wood Badge "critter" patrols. Instructors deliver training designed to strengthen the patrols. One-on-one work with an assigned troop guide helps each participant to reflect on what he has learned, so that he can better prepare an individualized "ticket". This part of the training program gives the adult Scouter the opportunity to assume the role of a Scout joining the original "model" troop, to learn firsthand how a troop ideally operates. The locale of all initial training is referred to as Gilwell Field, no matter its geographical location.[8]

The phrase 'working your ticket' comes from a story attributed to Baden-Powell: Upon completion of a British soldier's service in India, he had to pay the cost of his ticket home. The most affordable way for a soldier to return was to engineer a progression of assignments that were successively closer to home.

Part of the transformative power of the Wood Badge experience is the effective use of metaphor and tradition to reach both heart and mind. In most Scout associations, "working your ticket" is the culmination of Wood Badge training. Participants apply themselves and their new knowledge and skills to the completion of items designed to strengthen the individual's leadership and the home unit's organizational resilience in a project or "ticket". The ticket consists of specific goals that must be accomplished within a specified time. Effective tickets require much planning and are approved by the Wood Badge course staff before the course phase ends. Upon completion of the ticket, a participant is said to have earned his way back to Gilwell.[9]

After completion of the Wood Badge course, participants are awarded the insignia in a Wood Badge bead ceremony.[10] They receive automatic membership in 1st Gilwell Park Scout Group (called Gilwell Troop 1 in America and other countries). These leaders are henceforth called Wood Badgers or Gilwellians. It is estimated that worldwide over 100,000 Scouters have completed their Wood Badge training.[11] The 1st Gilwell Scout Group meets annually during the first weekend in September at Gilwell Park for the Gilwell Reunion.[12] 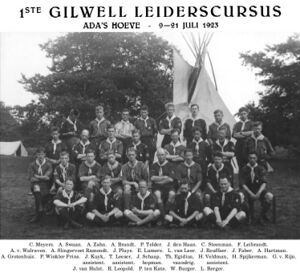 The first Wood Badge training took place on Gilwell Park. The estate continues to provide the service in 2007, for British Scouters of The Scout Association and international participants. Original trainers include Baden-Powell and Gilwell Camp Chiefs Francis Gidney, John Wilson and, until the 1960s, John Thurman.

Other sites providing Wood Badge training have taken the Gilwell name. Gilwell Ada's Hoeve, Ommen in the Netherlands, was the locale of the first Wood Badge training outside the United Kingdom, held in July 1923 by Scoutmaster Jan Schaap.[13] At Gilwell Sint Walrick, Overasselt, the Catholic Scouts had their training. Since approximately 2000, the Dutch Wood Badge training takes place on the Scout campsite Buitenzorg, Baarn, or outdoors in Belgium or Germany under the name 'Gilwell Training'.

In 2003, Scouts Australia established the Scouts Australia Institute of Training, a government-registered National Vocational & Education Training (VET) provider. Under this registration, Scouts Australia awards a "Diploma in Leadership" to those Adult Leaders who complete the Wood Badge training and additional competencies.[14] The Diploma of Leadership, like all Australian VET qualifications, is recognized throughout Australia by both government and private industry.[15]

Wood Badge training in Ireland goes back to the 1st Larch Hill of the Catholic Boy Scouts of Ireland, who conducted Wood Badge courses that emphasized the Catholic element of Scouting. Scouters must also hold a valid first aid certificate in order to be presented with the Wood Badge.[16]

Since 1948, Wood Badge training has been provided in the United States at Schiff Scout Reservation and, in the last decades, mostly at Philmont Scout Ranch.[17][18] Bill Hillcourt was a key figure of the early days of Wood Badge in the U.S., where it developed into a core asset of the Boy Scouts of America.[18] A new curriculum called "21st Century Wood Badge" was introduced in 2001. It is aimed at all adult leaders in the Boy Scouts of America, regardless of the program area they serve in, and eliminates the need for the previous program-specific Wood Badge courses: Cub Scout, Boy Scout, Varsity Scout, Venturing, and Sea Scouting.[17][6][9][19] No person may serve as Wood Badge staff on courses in 2007 or later unless that person took the course, or served on staff, after 2001.[10][17]

Retrieved from "http://en.scoutwiki.org/index.php?title=Wood_Badge_training&oldid=49161"
Categories:
Cookies help us deliver our services. By using our services, you agree to our use of cookies.