A woggle is a device to fasten the neckerchief, or scarf, worn as part of the Scout uniform.

Origins of the woggle

The origins of the woggle in Scouting lie with the use of rings made from bone, rope or wood, by American Scouts to keep their scarves together. These were called boon doggles, as a play on words of their alleged manufacture from dog bones.

A young Scouter, Bill Shankley, who was responsible for running a workshop and developing ideas for camping equipment at Gilwell Park, became aware of the American rings, and set out to create something similar. The result was a turk's head knot. He named his creation the woggle to rhyme with the American term.

Woggles were initially worn only by recipients of the Wood Badge, but a popular fashion was soon started in Scouting following an article in the June 1923 edition of The Scout. 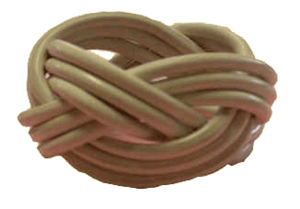 The word ring was used in editions of the Scouting handbook Scouting for Boys until 1929 when Robert Baden-Powell changed it in the 14th edition:

It [the scarf] may be fastened at the throat by a knot or woggle, which is some form of ring made of cord, metal or bone, or anything you like.

Origins of the name

Apart from the story of rhyming woggle with boon doggle, there are a few other references to the word woggle before its adoption by the Scout movement.

It is thought that woggle was a verb, with similar meanings to waggle and wobble, in the 16th century. It was in limited use as a noun around 1900.

Retrieved from "http://en.scoutwiki.org/index.php?title=Woggle&oldid=37056"
Categories:
Cookies help us deliver our services. By using our services, you agree to our use of cookies.