From ScoutWiki, For Everyone, Everywhere involved with Scouting and Guiding...
Jump to navigation Jump to search
File:Valley Forge Pilgrimage patch.png
Pilgrimage patch

The Valley Forge Pilgrimage and Encampment is the oldest annual Scouting event in the United States. It was first held on February 22 1913 (George Washington's 181st birthday), and has been held every year since.[1] The event is hosted by the Cradle of Liberty Council and commemmorates the soldiers of the Continental Army who braved the winter of 1777-78 at Valley Forge. Each year more than 2,000 brave the winter chill of the Delaware Valley to participate.

Boy Scouts of America (BSA) was only three years old, and was sweeping the country as a part of the progressive movement when approximately 300 Scouts from Philadelphia and suburban Delaware and Montgomery Counties took part in the first pilgrimage.[2]

Typical attendance ranged from 125 to 275 Scouts and leaders until the Great Depression. The event has been held every year, even during the Depression and World War II, though the event was then held at a reduced scale. In the early years, Scouts traveled to Valley Forge by foot, automobile, and train. For nearly 30 years, scouts arrived exclusively by automobile, until the 2007 Encampment.

The event was organized by an Episcopal priest, Rev. Dr. W. Herbert Burk of Norristown.[3] Burk had also been instrumental in building the Washington Memorial Chapel at Valley Forge. Burk continued to be involved in the planning for the annual pilgrimage for the next two decades. The term "pilgrimage" was chosen because every participating troop lined up in formation with their flags and paraded to the chapel for the memorial service for George Washington.

The first official overnight Valley Forge Encampment in connection with a pilgrimage was in 1948. Prior to that there were many unofficial campouts on the site, as the area was relatively rural and unpopulated. General John Pershing and Daniel Carter Beard have both been featured guests. The biggest crowd was at the 1932 pilgrimage, which marked Washington's 200th birthday. An estimated 9,000 Boy Scouts from Pennsylvania and neighboring states, plus 10,000 adults and children, were on hand.[4] 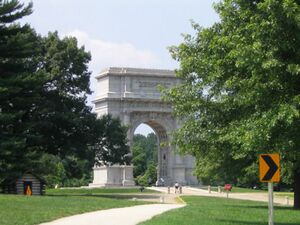 The event itself is divided into two parts: the Encampment, in which Scouts camp from Friday through Sunday on the Presidents' Day weekend, and the Pilgrimage which is all day Saturday. During the Pilgrimage, participants move around the Valley Forge NHP to hear volunteer interpreters from the National Park Service tell how the Continentals lived. Replicas of the original huts provide a glimpse of daily life. Conditions during the winter were poor, so the stories are also told how more than 2,000 soldiers died from typhus, dysentery, typhoid and pneumonia.