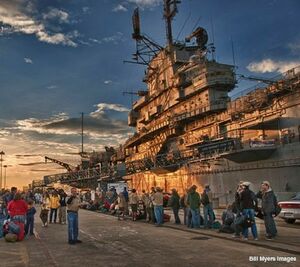 USS Hornet Sea, Air and Space Museum - historic floating museum and state historic landmark, this famous aircraft carrier is docked in Alameda Harbor and regularly hosts overnight scout and family campouts. Many exhibits help visitors explore the development of science and technology in the military during the 20th Century. Explore aviation, citizenship and engineering activities onboard.

It is located on the southernmost pier of the former Naval Air Station Alameda. There are plans to relocate it to the corner of the Seaplane Lagoon closest to the Alameda Point Museum

This museum is composed of the USS Hornet (CV-12) aircraft carrier, exhibits from the NASA Apollo moon exploration missions, and several retired aircraft from the Second World War and the transonic and early supersonic jet propulsion period. A number of compartments contain exhibits concerning contemporary carriers that are supported by related associations. The flight deck, hangar deck, and first deck below are open for self-guided tours. Docent-led tours are available into the ship's navigation and flight deck control areas of the island and down into one of the engineering spaces containing two of the four ship's propulsion turbines.

USS Hornet (CV/CVA/CVS-12) is a United States Navy aircraft carrier of the Essex class. Construction started in August 1942. She was originally named USS Kearsarge but was renamed in honor of the prior USS Hornet (CV-8), which was lost in October 1942, becoming the eighth ship to bear the name.

Hornet was commissioned in November 1943, and after three months of training joined the U.S. forces in the Pacific War. She played a major part in the Pacific battles of World War II, and also took part in Operation Magic Carpet, returning troops back to the U.S. Following World War II, she served in the Vietnam War, and also played a part in the Apollo program, recovering the Apollo 11 and Apollo 12 astronauts as they returned from the Moon.

Hornet was finally decommissioned in 1970. She was eventually designated as both a National Historic Landmark and a California Historical Landmark, and in 1998 she opened to the public as the USS Hornet Museum in Alameda, California.

The USS Hornet Museum has a number of aircraft on display including propeller aircraft, jet aircraft, and helicopters. The aircraft are from the 1940s, 1950s, 1960s, 1970s, and 1980s. Museum guests can get up-close to the aircraft displayed on the Flight Deck and on the Hangar Deck. Aircraft are sometimes moved between decks utilizing the ship's #1 aircraft elevator. Exhibit highlights include: 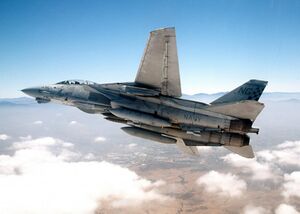 Overnight Camping on the Grey Ghost

Imagine spending the night on the longest-serving aircraft carrier in Navy history! Organized youth groups have that opportunity! Deployment aboard the Hornet includes:

Complete your Boy Scout Aviation & Radio Merit Badge requirements aboard the USS Hornet Museum in one day. Get a true, hands on experience!

Retrieved from "http://en.scoutwiki.org/index.php?title=USS_Hornet_Museum&oldid=43412"
Categories:
Cookies help us deliver our services. By using our services, you agree to our use of cookies.