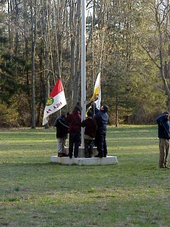 Treasure Island is a Boy Scout camp located between Point Pleasant, Pennsylvania and Frenchtown, New Jersey, situated in the middle of the Delaware River and owned by the Cradle of Liberty Council (formerly the Philadelphia Area Council prior to its merger with the Valley Forge Council in 1996). Treasure Island is the oldest continually operated Boy Scout Camp in the country and has had continuous Scouting since 1913.

In April 2005, storms caused flooding that was the highest since 1955. As a result, Treasure Island was closed to summer campers in 2005 for the first time in twenty-five years. The Council spent more than $1 million to rehabilitate the camp in preparation for reopening in June 2006.

The island has twelve camping sites:

Among the important buildings on the island are the Kiwanis Lodge (handicraft), the Klein Lodge (nature), the Health Lodge, the Trading Post, and "City Hall", which is the main office in control of Treasure Island. In most of the lodges, merit badges are offered to scouts. The Unami Lodge is where the first Lodge of the Order of the Arrow was founded. The Dining Hall has been in continuous use for many years. There is also the Goodman Stockade, where the opening campfires are held on Sunday nights, and the Ceremonial Grounds, where the Order of the Arrow ceremonies and the Friday night closing campfire are held. The camp's administrative buildings are located near the Dining Hall.

Treasure Island has a swimming pool, which is scheduled to be demolished and rebuilt in 2006 or 2007. Boating is conducted in canoes and rowboats on the west side of the island at the Boathouse.

Every year, the Treasure Island camp staff create a different theme, on which the summer activities are based. Tube rafting is offered to Scouts during the summer, and Scouts may float downstream for about 5 miles to Point Pleasant, Pennsylvania, then get driven by bus back up to the mainland across from Treasure Island, and taken by a boat back to the island.

Bike and canoe trips in the surrounding area are conducted on a daily basis along the old Delaware Division of the Pennsylvania Canal. Troops often take advantage of the camp's location in a river and near the Delaware Canal State Park. Climbing and rappelling trips take place at Ralph Stover State Park.

Most of Marshall island is natural and uninhabited. There is a path leading from the archery and rifle ranges that runs north and branches off in two directions. The branch to the left leads to a series of abandoned buildings and an abandoned field, remaining from when Eagle Island operated as a separate camp in the 1970's. The right branch leads to unused campsites and the C.O.P.E. course.

Retrieved from "http://en.scoutwiki.org/index.php?title=Treasure_Island_(Scout_reservation)&oldid=29044"
Categories:
Cookies help us deliver our services. By using our services, you agree to our use of cookies.