From ScoutWiki, For Everyone, Everywhere involved with Scouting and Guiding...
(Redirected from Thomas Corbett, 2nd Baron Rowallan)
Jump to navigation Jump to search

The first son of Archibald Corbett, the liberal politician and property developer and Alice Mary, the daughter of John Polson, a corn merchant, Thomas Corbett was born in Chelsea, London, on 19 December 1895 and was brought up in London and on the family’s Scottish estates. Known as "Billy" to the family, he was educated at Wellington House School in Kent[1]. and Eton College.

Thomas Corbett was 19 when World War I broke out; he secured a Commission in the Ayrshire Yeomanry and went with them to Gallipoli in October 1915. The Ayrshires were amongst the last troops to be evacuated and went from there to Egypt, forming part of the cavalry reserve in the Second Battle of Gaza [2]. He then transferred to the Grenadier Guards; after re-training he was sent to the Western Front in March 1918, joining the 1st Battalion at Mercatel as a Lieutenant. This coincided with the German Spring Offensive (Operation Michael), and the battalion was soon in action. At Boyelles on 30 March 1918, Corbett attempted to dig out some wounded soldiers who had been buried by artillery, while "under heavy fire and in full view of the enemy" and was awarded the Military Cross but received a leg wound which left him with a permanent disability[3].

He married Gwyn Mervyn Grimond on 14 August 1918. She was the sister of Jo Grimond, Baron Grimond, the leader of the Liberal Party 1956-67 and daughter of Joseph Bowman Grimond of St Andrews, Fife. He had met her while on leave; they had five sons (one of whom was killed in action in 1944) and a daughter. On leaving the army he became a successful breeder of pedigree dairy cattle the family estate in Ayrshire and campaigned for the eradication of bovine tuberculosis. He succeeded as the 2nd Baron Rowallan on 19 March 1933. [4]. Rowallan became district commissioner for north-west Ayrshire Scouts in 1922 and also served as Adjutant of the Ayrshire Yeomanry.

In 1939, he raised a new Territorial Army battalion of the Royal Scots Fusiliers whom he accompanied to France as part of the British Expeditionary Force in 1939. Evacuated from Cherbourg during Operation Ariel, he was then given command of a Young Soldiers’ Battalion in the Scottish Highlands; the adventurous training he initiated was based in part on his long association with the Scout Movement [5]. His success earned him the position of Commandant at the new Highland Fieldcraft Training Centre in Glenfeshie and Poolewe, which had been established to provide leadership experience to junior officers. A measure of his influence is that a “Rowallan Company” was formed at Royal Military Academy Sandhurst in 1977 using his methods to improve the performance of Officer Cadets[6]. 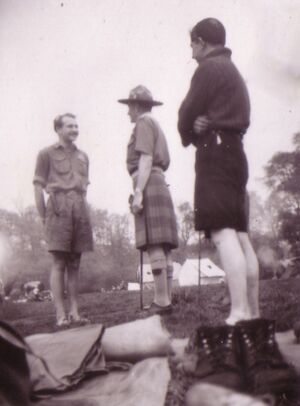 In 1944, Rowallan accepted the position of Scottish Headquarters Commissioner for leader training. The death of Lord Somers in 1945 coincided with his demobilization from the Army and he accepted the invitation to become the Chief Scout of the British Commonwealth and Empire from 1945 to 1959.[7] Rowallan was awarded the Silver Buffalo Award, the highest award of the Boy Scouts of America in 1948.[8] He received the Bronze Wolf, the only distinction of the World Organization of the Scout Movement, awarded by the World Scout Committee for exceptional services to world Scouting, in 1957. Rowallan served on the World Scout Committee of the World Organization of the Scout Movement from 1947 until 1953. During this time, he was also a governor of the National Bank of Scotland[9]. In 1954, a Britannia Class Locomotive (No. 70045) was named in his honour[10]. Scout camp sites in Riddells Creek[11] in Victoria, and Wrexham[12] in Wales are named after him; as is the Kenya Scouts Association Headquarters Campsite in Nairobi[13].

Lord Rowallan became Governor of Tasmania on 21 October 1959, despite the Australian Labor Party having resolved that the next governor of Tasmania should be an Australian. He worked tirelessly to promote Tasmania and to protect its interests and sovereignty. Rowallan Power Station and its associated dam and lake are named after him. In his spare time, he built up a herd of Jersey cattle at Government House and sailed a yacht which he later gave to the local Sea Scouts. In 1961 Rowallan was diagnosed as suffering from cancer of the palate, for which he was treated in London. His term of office ended on 25 March 1963 and he retired to his family estate in Scotland. He completed his autobiography, "Rowallan", in his eightieth year.

He died at Rowallan Castle near Kilmarnock on 30 November 1977. He was survived by his daughter and four of his five sons; his other son, John, had been killed in action in 1944[14].

Retrieved from "http://en.scoutwiki.org/index.php?title=Thomas_Godfrey_Polson_Corbett&oldid=49870"
Categories:
Cookies help us deliver our services. By using our services, you agree to our use of cookies.