The Scout Association of Guyana

The Scout Association of Guyana was founded in 1909 in what was then British Guiana under the leadership of Sergeant Major George Manly, a member of the British Regiment stationed there. The first Scout Troop was formed at Queen's College.

The movement spread rapidly, with Troops being attached chiefly to Church schools. There were few open Troops in the beginning, but one which flourished was Troop 39. It was the first Troop to make the overland journey to Kaieteur Falls. This Troop produced some of Guyana's finest Scout Leaders - including two Chief Commissioners, D.B. St. Aubyn and Lawrence Thompson, and 4 Assistant Chief Commissioners for Cub Scouts. 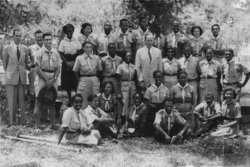 Scouting emerged in the county of Essequibo in the 1940s with Troops mostly attached to Church Schools. A troop was started at Onderneeming Boys' Reformatory in Suddie. Sam Cummings, an instructor at the School, was the first Scout Leader, followed by the Headmaster, a Mr Kissoon. There were a few Troops and Packs in the Pomeroon and Rupununi districts. For many of these Troops the departure of the resident Priest meant closure of the Troop. A Troop was run by Canon John Dorman, a Gilwellian at Kamarang, Upper Mazaruni, catering mainly for Amerindian boys.

Another prominent Troop is St Stanislaus College Troop, catering for Roman Catholic boys before the school became co-educational. Among its leaders is Father Bernard Darke, S.J., a Gilwellian who made a great contribution to Scouting in Guyana before his tragic death. As well as running the Troop he was a member of the Training Team and served on the Executive Committee.

Scouting in Guyana was probably at its peak around 1969 when their Diamond Jubilee was celebrated and the 3rd Caribbean Jamboree was held there in August. In 1974 the government formed the Guyana National Service, a compulsory youth organization. This affected the Scout Movement's numbers. Some leaders joined the National Service where they were paid. While there was no ban on Scouting during this period the movement was obliged to keep a low profile. With changes in the political situation came renewed support for Scouting in the 1980s.

To obtain the highest rank in Guyana, a Scout must pass the normal proficiency tests, and, in addition, must be able to obtain badges in agriculture, which prepares each Scout to feed himself from his own produce.

Many of the Anglican and Roman Catholic priests who came from England to serve in Guyana were Gilwell Scouters, including the late Archbishop of the West Indies, Dr Alan John Knight, who served on the Colony Scout Council for many years and welcomed the Cub Pack from St Gabriel's School, Convent of the Good Shepherd, who held their meetings on the lawn of his residence, Austin House, for many years. A lack of official trainers in Guyana had Scouters train at Paxdale, Trinidad for many years. Brian Fox, seconded from England in the 1950s spent about three years training leaders and expanding Scouting. It was in this time that British Guiana's Scout Training Team was formed.

Presidents of the Scout Association have included:

Cubbing in Guyana started in 1926, the first pack being St Barnabas Anglican Church, under the leadership of Mr Braithwaite. The first ACC Cubs was Mrs Isadora Walton, Cubmaster of Pack 39, who did a great deal to spread this section of the Movement.

The first Guyanese Cubmaster to be trained at Gilwell was Evelyn St Aubyn who succeeded Isadora Walton as ACC Cubs around 1938. George Manly's grand-daughter, Daphne Manly, ran Pack 39 for many years.

A special program of activities was planned for the 40th Anniversary of Cubbing in Guyana. On 17 April 1966 over 200 Cubs spent the day at Camp Jubilee observing Cub Day. Clement Gomes and the Camp Jubilee staff assisted Pack Scouters. Communion services were held on arrival in both Anglican and Roman Catholic chapels, and were well attended.

On 20 August Packs held a campfire at Scout Headquarters to raise funds for the Blind Association. Michael Pereira arranged the program. The campfire was well attended and raised $108.50.

On 2 October a party of Old Wolves spent the day at Camp Jubilee. Three yellow cassia trees were planted by CC Lewis, E. Reece and Elsie Taylor in commemoration of the 40th Anniversary. On 30 October Thanksgiving services were held at Main Street Catholic Church and Christ Church (Anglican).

On 26 November the Annual Play Acting Competition was held at Scout Headquarters. The Cup, presented by its donor, Mr. LB Thompson, was won by St Francis Pack. On 9 December Old Wolves entertained Mr. George Mitchell in the Cub Den. Mr. Mitchell expressed his pleasure at seeing the Den, whose sod he had turned on his previous visit in 1963.

Retrieved from "http://en.scoutwiki.org/index.php?title=The_Scout_Association_of_Guyana&oldid=49721"
Categories:
Cookies help us deliver our services. By using our services, you agree to our use of cookies.