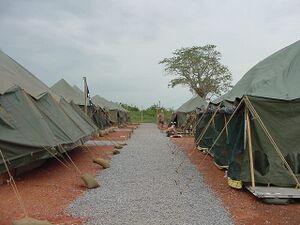 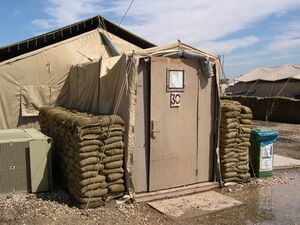 A tent is a shelter, consisting of sheets of fabric or other material draped over or attached to a frame of poles and/or ropes. Some tent styles are free-standing, while others are attached to the ground using guy ropes tied to stakes (pegs). Tents were first used as portable homes by nomadic peoples, but today, their main application is for recreational camping. Modern tents are usually made of fire-retardant material.

Tents range in size from those barely large enough for one person to sleep in up to huge (circus) tents capable of seating thousands of people. The bulk of this article is concerned with recreational camping using tents capable of sleeping from 1 up to about 10 people. Larger tents are discussed in a separate section below.

Tents for recreational camping are generally transportable by car. Depending on tent size and the experience of the person or people involved, such tents can usually be assembled (pitched) in between 5 and 25 minutes; disassembly (striking) takes a similar length of time (some very specialised tents have spring-loaded poles and can be 'pitched' in 2 seconds, but take somewhat longer to strike).

Smaller tents may be sufficiently light that they can be carried for long distances on a person's back, or on a touring bicycle, a boat, or even a pack animal.

The military organizations of most nations use tents to temporarily house troops living and working under field type conditions. 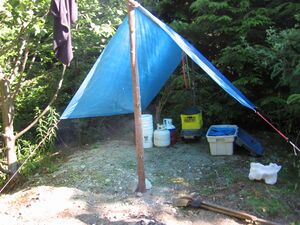 An example of a simple tented shelter.

Tent fabric may be made of many materials including cotton (canvas), nylon, and polyester. Cotton absorbs water, so it can become very heavy when wet, but the associated swelling tends to block any minute holes so that wet cotton may be more waterproof than dry cotton. Nylon and polyester are much lighter than cotton and do not absorb much water; with suitable coatings they can be very waterproof, but they tend to deteriorate over time due to a slow chemical breakdown caused by ultra-violet light. Since stitching makes tiny holes in a fabric, it is important that any seams are sealed or taped to block up these holes.

Rain resistance is measured as a hydrostatic head in millimetres (mm). This indicates the pressure of water needed to penetrate a fabric. Heavy or wind-driven rain has a higher pressure than light rain. Standing on a groundsheet increases the pressure on any water underneath. Fabric with a hydrostatic head of 1000 mm or less is best regarded as shower resistant, with 1500 mm being usually suitable for summer camping. Tents for year round use generally have at least 2000 mm; expedition tents intended for extreme conditions are often rated at 3000 mm. Where quoted, groundsheets may be 5000 mm or more.

Many tent manufacturers indicate capacity by such phrases as "3 berth" or "2 person". These numbers indicate how many people the manufacturer thinks can be crammed snugly into a tent with just sleeping bags. These numbers do not allow for any personal belongings such as luggage, inflatable mattresses, camp beds, cots, etc. Experience indicates that camping may be more comfortable if the actual number of campers is 1 or even 2 less than the manufacturer's suggestion.

Tents can be improvised using waterproof fabric, string, and sticks. This allows them to be easily built and moved.

Parts of a modern tent 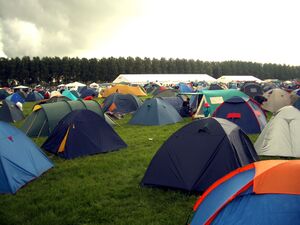 A variety of dome tents

When a flysheet or outer tent is used, it is important that there be no contact with the inner tent it is protecting; this keeps the inner dry even if the outer is wet. Expedition tents often have extra poles to help ensure that wind does not blow the two layers into contact. The double layer may provide some insulation. 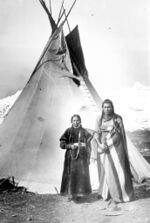 Many factors affect tent design, including:

A tent required only for summer use may be very different from one to be used in the depths of winter. Manufacturers label tents as one-season, two/three-season, three/four season, four season, etc. A one-season tent is generally for summer use only, and may only be capable of coping with light showers. A three-season tent is for spring/summer/autumn and should be capable of withstanding fairly heavy rain, or very light snow. A four-season tent should be suitable for winter camping in all but the most extreme conditions; an expedition tent (for mountain conditions) should be strong enough to cope with heavy snow, strong winds, as well as heavy rain. Some tents are sold, quite cheaply, as festival tents; these may be suitable only for camping in dry weather, and may not even be showerproof. 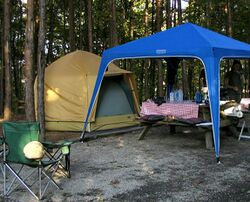 A large family tent for car-camping, with a gazebo 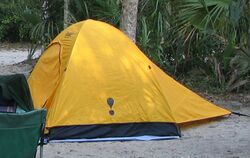 Height is significant in connection with moving around in a sizable tent, and in changing clothing in any tent. There are basically four useful heights to consider: lie down only, sit, kneel, stand. The exact heights at whch these apply depend on the heights of the campers involved; those over 182 cm (6 ft) are likely to have less choice of tents than those who are somewhat shorter. As a starting point, sitting height is often between 90 and 105 cm (3 ft to 3 ft 6 in), and kneeling height may be between 120 and 150 cm (4 ft to 5 ft).

In some areas of some countries (e.g. Lake District in England), there may be restrictions as to what colour tents can be, there by reducing the visual impact of campsites. The best colors for low visibility are green, brown, or tans. It is important to check for any such restrictions

Some styles of camping and living outdoors entails quick setup of tents. As a general rule, the more robust the tent, the more time and effort needed to setup and dismantle. The style of the tent also has a great impact on its ease of use. 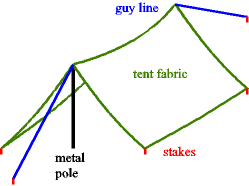 Shelters are not normally used for sleeping. Instead they may act as a store or provide shelter from sun, rain, or dew.

With modern materials, tent manufacturers have great freedom to vary types and styles and shapes of tents.

Many tents which use rigid steel poles are free-standing and do not require guy ropes, though they may require pegs around the bottom edge of the fabric. These tents are usually so heavy (25 to 80 Kg) that it takes a rather strong wind to blow them away.

Flexible poles used for tents in this section are typically between 3 and 6 metres long (10 and 20 feet) and are normally made of tubes of fibreglass with an external diameter less than 1 cm (1/3 inch). For ease of transportation, these poles are made in sections some 30 cm to 60 cm long (1 to 2 ft), with one end of each section having a socket into which the next section can fit. For ease of assembly, the sections for each pole are often connected by an internal cord running the entire length of the pole.

This is a basic dome tent, shown without rain fly or stakes.

The basic dome has a rectangular floor and two poles which cross at the peak; each pole runs in a smooth curve from one bottom corner, up to the peak, and then down to the diagonally opposite bottom corner. There are usually special fittings at each corner which fit into sockets at the ends of each pole - pole tension keeps everything in shape. The poles usually run outside the tent fabric, which is attached to the poles by sleeves. In some new models clips are also used. Dome tents do not require guy ropes and pegs for structural integrity, but must be pegged down in high winds.

The basic dome design has been modified extensively, producing tents with three poles, tents with irregularly-shaped bases, and other unusual types. A common variation is to add a third pole going from corner to corner on one side; this is angled away from the tent, and supports an extended flysheet or outer tent to give a porch/storage area. 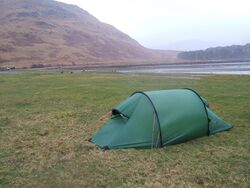 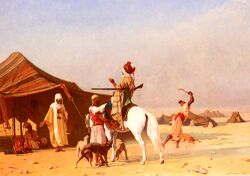 Most of these tent styles are no longer generally available. Most of these are single-skin designs, with optional fly sheets for the ridge tents.

All the tents listed here had a canvas fabric and used a substantial number of guy ropes (8 to 18). The guys had to be positioned and tensioned fairly precisely in order to pitch the tent correctly, so some training and experience were needed. This made these styles relatively unsuitable for casual or occasional campers. Pup tents might use wooden or metal poles, but all the other styles mentioned here used wooden poles. 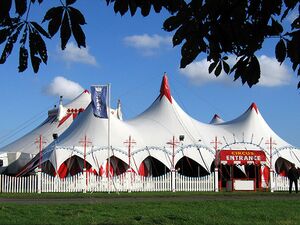 These larger tents are seldom used for sleeping.

Retrieved from "http://en.scoutwiki.org/index.php?title=Tent&oldid=49951"
Categories:
Cookies help us deliver our services. By using our services, you agree to our use of cookies.