A tarpaulin or tarp is a large sheet of strong, flexible, water resistant or waterproof material, often cloth such as canvas coated with plastic or latex. In some places such as Australia, and in military slang, a tarp may be known as a hootchie. Tarps often have reinforced grommets at the corners and along the sides to form attachment points for rope, allowing them to be tied down or suspended. Inexpensive modern tarps are made from woven polyethylene; this material is so associated with tarps that it has become known as polytarp.

The word tarpaulin originated as a compound of the words tar and palling, referring to a tarred canvas pall used to cover objects on ships. By association, sailors became known as tarpaulins and eventually tars.

When used for a tarp, the word hoochie (also hootchie, hootch, or hooch) comes from the Japanese uchi ("house"). Huts in various parts of rural Asia are known by this or similar names, and during the Korean and Vietnam Wars English-speaking soldiers came to use the word to refer to their own makeshift shelters, which often consisted of little more than a tarp.

Tarps have multiple uses, including as shelter from the elements (i.e. wind, rain, or sunlight), a ground sheet or a fly in camping, a drop sheet for painting and for protecting objects, such as vehicles or wood piles. It is also used on outdoor market stalls to provide some protection from the elements of nature.

Polytarp is not a traditional fabric, but rather a laminate of woven and sheet material. The center is loosely woven from strips of polyethylene plastic, with sheets of the same material bonded to the surface. This creates a fabric-like material that resists stretching well in all directions and is waterproof. When treated against ultraviolet light, these tarps can last for years exposed to the elements, but non UV treated material will quickly become brittle and lose strength and water resistance if exposed to sunlight.

Polytarp has also proven to be a popular source when an inexpensive, water resistant fabric is needed. Many amateur builders of plywood sailboats turn to polytarp for making their sails, as it is inexpensive and easily worked. With the proper type of adhesive tape, it is possible to make a serviceable sail for a small boat with no sewing.

Typically used for large medium advertising or for protection on scaffoldings. The aim of the perforations (from 20% to 70%) is to reduce wind vulnerability. 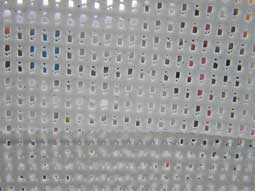 an example of perforated tarp

Retrieved from "http://en.scoutwiki.org/index.php?title=Tarpaulin&oldid=49473"
Categories:
Cookies help us deliver our services. By using our services, you agree to our use of cookies.