The Stevedore knot is a stopper knot, often tied near the end of a rope. It is more bulky and less prone to jamming than the closely related figure-of-eight knot.

There is a lack of consensus among knot experts regarding the origin of the name. Many sources, including The Ashley Book of Knots, suggest the knot was used by stevedores in their work loading and unloading ships. To raise and lower cargo they used large blocks and these required a larger stopper knot to prevent the line from running completely through the block.[1]

However, in The Art of Knotting & Splicing, Cyrus Day disagrees, stating "the name originated in a pamphlet issued about 1890 by the C.W. Hunt Company, which sold rope under the name Stevedore. It was subsequently adopted by dictionaries, engineers' handbooks, and other works of reference, and it is now firmly established in books, if not in the vocabulary of seamen."[2] 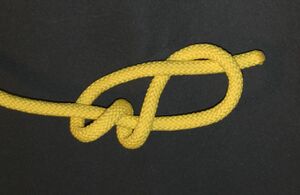 The knot is formed by following the steps to make a figure-of-eight knot, but the working end makes an additional round turn around the standing part before the end passes back through the initial loop.