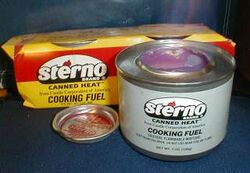 A can of Sterno aflame.

Sterno® Canned Heat™ is a fuel made from denatured and jellied alcohol. It is designed to be burned directly from its can. Its primary use is in the food service industry for buffet heating. Other uses are for camp stoves and as an emergency heat source.

The Sterno brand is owned by the Candle Corporation Of America, a subsidiary of Blyth, Inc. The name comes from that of the original manufacturer: S. Sternau & Co. of Brooklyn, New York, a maker of chafing-dishes, coffee percolators and other similar appliances. They had previously applied the name to their "Sterno-Inferno" alcohol burner. In 1918 they promoted their Sterno Stove as being a perfect gift for a soldier going overseas.

Invented around 1900, Sterno is made from ethanol, methanol, water and an amphoteric oxide gelling agent, plus a dye that gives it a characteristic pink color. Designed to be odorless, a 7 oz (198 g) can will burn for up to two hours. The methanol is added to denature the product, which essentially is intended to make it too toxic to be drinkable (see methylated spirit for more information).

Sterno has long been mixed with water and other liquids to produce a drink called "canned heat", "squeeze" or "pink lady". The product is squeezed through a rag (or in other traditions, a loaf of French bread with ends removed) to extract the alcohol. These alcoholic beverages, primarily used in poorer communities, have been linked to numerous deaths from methanol poisoning, including 31 people in Philadelphia in 1963.

In NASCAR racing, it is alleged that sterno was used in Mike Waltrip's #55 racing Toyota Camry as an illegal fuel supplement to increase the horsepower during qualifying.[1] From the article "At the same time, inspectors will be 'going over the 55 car [Waltrip's] with a fine-tooth comb,' Hunter said after inspectors found a gel-like coating inside the manifold. Several engine builders from other teams said the substance appeared to be Sterno, a bluish gel that could provide a hotter, cleaner burn inside the engine to create more horsepower."

Judging from the customers I have had on this first day with the new route, the "tourists" seem to be the same old vagrants I was selling to in the business district. In a stupor induced by Sterno, they have doubtlessly stumbled down into the Quarter and thus, to Clyde's senile mind, qualify as "tourists".

Retrieved from "http://en.scoutwiki.org/index.php?title=Sterno&oldid=34158"
Categories:
Cookies help us deliver our services. By using our services, you agree to our use of cookies.