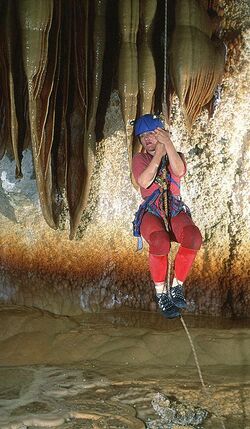 The two-ascender "frog" is a sit-stand system. It is the most widely used among cavers worldwide.

Descent (abseiling or rappeling) uses various forms of friction brake to control speed. The most commonly used are the Petzl "stop" (self-locking) and "bobbin", and four or five bar "racks". For safe SRT, especially on drops with complex rigging with intermediate belays, it is essential that the abseiling device can be removed from the rope without being unclipped from the user's harness.

For ascent ("prussiking" or "jugging"), cammed devices ("ascenders") are used that can be pushed up the rope but that lock and hold the user's weight when a downward force is applied; these must also be easily removable from the rope without being detached from the user. Knots such as the Prusik, Bachmann and Klemheist are used to ascend ropes in emergencies in climbing and mountaineering; they have ceased to be the primary ascent method because ice or mud greatly reduce their efficacy.

Various prusik systems have been devised. They can broadly be divided into:

Most cavers worldwide favour the sit-stand method, and make extensive use of complex rope rigging with intermediate belays and "deviations", so that the rope nowhere rubs against the rock, and to avoid hazards such as loose rocks and waterfalls.

Many cavers in the southeastern USA favour rope-walking systems, and have traditionally used simple rope rigging, with the rope belayed only at the top of the drop (the "indestructible rope technique").

Other essential items of a personal SRT set are a sit harness and one or more safety cords ("cows-tails") terminated in karabiners, for temporary attachment to safety ropes at the heads of drops and used in manoeuvres at intermediate rope belays.

Retrieved from "http://en.scoutwiki.org/index.php?title=Single_Rope_Technique&oldid=37152"
Categories:
Cookies help us deliver our services. By using our services, you agree to our use of cookies.