Scouting and Guiding on the Isle of Man

From ScoutWiki, For Everyone, Everywhere involved with Scouting and Guiding...
(Redirected from Scouting on the Isle of Man)
Jump to navigation Jump to search

The Scout Association's Patron is the Lieutenant Governor Sir Paul Haddacks, and its President is a former Chief Minister, Sir Miles Walker.

The Isle of Man's largest Scout Group is the 2nd Onchan Group.[2]

The 1st Malew Group were the first Scout Group on the Isle of Man. The Scouts scarf and name tag are in red and white reflecting the close relations to the Air Scouts that they were originally.

The Isle of Man has attracted Irish Scouts. This was particularly the case under the patronage of Sir Charles Kerruish who facilitated the use of his own lands for Scout camping. Many groups fostered personal friendships with the Speaker of the House of Keys. In fact in 1979, as part of the island's celebration of the 1,000th anniversary of Tynwald, Sir Charles invited Irish Scouts to form part of the guard of honour for the arrival of Queen Elizabeth II. All uniformed personnel present, including the Irish guests received a specially minted medal from the Queen. It was seen a great honour that, on arguably the largest celebration ever on the island, the close link with Irish Scouting was emphasised, as they stood side by side with Manx Scouts and the large military presence who were there to honour both the island itself and the Lord of Mann.

Ten Manx Scouts and one Leader attended the 21st World Scout Jamboree in 2007, as part of the Cumbria and Isle of Man Unit.[3]

The Three Legs Challenge is a hiking challenge open to all Scouts and Scout Network members. Those who undertake the challenge must walk 3 of the island's long distance walkways within 12 months. Its name is derived from the Triskelion that is the island's national symbol. The routes are:

Beginning at the Quarterbridge in Douglas and follow the Heritage Way along the disused Railway Line to Peel. Finish is at the Peel Heritage Centre.
Distance 10.5 miles.

Start at Castle Rushen in Castletown and follow the Bayr ny Skeddan to Peel. Finish at Peel Castle.
Distance 15 miles.

Start at the bottom of Sky Hill, near Ramsey and follow the Millennium Way to Castletown. Finish at Castle Rushen. This hike can be completed in either one day or two consecutive days, camping overnight.
Distance 26 miles. 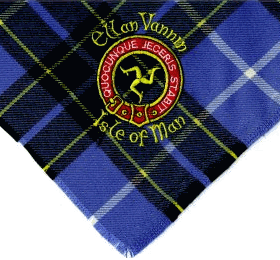 Scout sections for over 14s on Isle of Man include Onchan, Douglas, Northern and Southern District Explorer units, and the Isle of Man Scout Network.

Retrieved from "http://en.scoutwiki.org/index.php?title=Scouting_and_Guiding_on_the_Isle_of_Man&oldid=29408"
Categories:
Cookies help us deliver our services. By using our services, you agree to our use of cookies.