Scouting in Yorkshire and the Humber 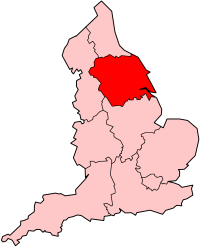 Scouting in Yorkshire and the Humber is largely represented by the Scout Association of the United Kingdom and some Groups of traditional Scouting including the Baden-Powell Scouts' Association.

History of Scouting in Yorkshire and the Humber

Central Yorkshire, provides Scouting opportunities for young people and adults in the metropolitan boroughs of Leeds and Wakefield and the surrounding area.[3]

The County is currently divided into eight Scout Districts:

The County organises international expeditions, enabling a number of Explorer Scouts and Scout Network members to undertake adventurous activities in other countries.

The next County Expedition is in 2008, where they will be visiting Kenya. The Expedition will consist of mountaineering on Mount Kenya, trekking by camel back, and a community project. There will also be a safari through a game reserve.

Scouting in Humberside covers the former non-metropolitan county of Humberside. The headquarters of Humberside Scouts is at Raywell Park Activity Centre.[6]

There are 13 districts within the Humberside County:

North Yorkshire Scouts clebrated the Centenary of scouting in 2007 by joining the Bilton Conservation Group to plant 2000 trees donated by the Woodland Trust.[11]

The County is currently divided into 15 Scout Districts:

The County is divided into 10 Scout Districts:-

The Doncaster Danum District has a Scout Band.

SGS Outdoors is a combined Scout and Guide Shop in Sheffield with a full e-commerce website.[21] There is also a Scout Shop in Doncaster with online access.[22]

The Scout county's office is located within the Jubilee Centre at the Bradley Wood Campsite on the outskirts of Brighouse.[24]

West Yorkshire Scouts celebrated a successful centenary year of 2007 with an awards evening in early 2008.[25]

The Aldwark Water Activity Centre is owned and maintained by Central Yorkshire Scout Association County. The centre is located on the River Ure, 8 miles upstream from the city of Leeds.[34]

The centre has one large camping field, as well as a converted mill which consists of a number of dormitories. The centre has kayaks and boats for sailing, and runs training courses to gain qualifications in these activities.

The Bramhope Scout Campsite is situated just outside of the village of Bramhope, approximately 8 miles north-north-west of Leeds. The site covers thirteen and a half acres of woodland and fields, offering various camping pitches for any sized camp up to a District camp.[35]

As well as the camping pitches, there are a number of buildings on the site offering accommodation and indoor training facilities. The site offers archery, air rifles, pedal karting, climbing, abseiling, and pioneering, amongst other activities. There are also facilities located near to the site which enable sailing, kayaking and swimming.

The are five camp sites:-

Hesley Wood is used for Wood Badge and other Adult Leader Training.

Bradley Wood is the West Yorkshire Scout Association County Campsite and there are several others run by Scout Districts or Groups.[24] [37]

Retrieved from "http://en.scoutwiki.org/index.php?title=Scouting_in_Yorkshire_and_the_Humber&oldid=34176"
Categories:
Cookies help us deliver our services. By using our services, you agree to our use of cookies.