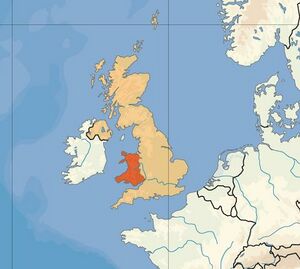 Scouting in Wales is largely represented by the Welsh Scouting Sgowtiaid Cymru branch of the Scout Association of the United Kingdom, although some groups of the Baden-Powell Scouts' Association also operate there.

The 1st Colwyn Y.M.C.A. Baden Powell Boy Scouts appears to be the oldest Scout Troop in Wales, foundered in late April or early May 1908.[7]

In 1911, Edward, Prince of Wales accepted the appointment as Chief Scout of the Principality of Wales and held this position until he became official patron of the Scout Movement across the British Empire on becoming King Edward VIII in 1936.[8]

In the Centenary year of 2007, The Scouting Association in Wales received 5 wards totally more than 16,000 pounds in lottery cash, awarded under the Awards for All Wales programme.[9] In March 2008, it launched a pilot scheme in Cardiff and the Vale of Glamorgan similar to the Health Challenge Wales Guiding Scheme introduced earlier by Welsh Guides throughout the country.[10]

In 2008, Ty Hafan Children’s Hospice opened its own Scout group. This was the first hospice in Wales to do so.[13]

Cardiff and The Vale of Glamorgan Scout Area (CATVOG)

The 1st Cathays Al Huda Scout Group in Cardiff became the first Muslim Scout Group in Wales in 2006 and the tenth in the United Kingdom.[21] Youth numbers are increasing, but a shortage of leaders is reported. [22] Founded in March 2006 by Salah Aboulgasem,[23] the troop was active a year prior to its official establishment.[24] In 2006, 1st Cathays Al Huda had 90 members, composed of a Beaver Scouts section, separate Cub Scouts sections for boys and girls, and separate Scouts sections for boys and girls.[25] According to Aboulgasem, the troop was launched to aid Muslims in taking leadership positions in society.[23] Aboulgasem said that "[t]here's a lack of integration with Muslims" and that a number of Muslims were falling behind in education.[26] Non-Muslims are also permitted to join the troop,[21] and several are members.[27] The language spoken during the meetings is English.[24]

Carmarthenshire Scout Area (Sgowtiaid Sir Gar) covers the administrative county of Carmarthenshire, with one exception (i.e. Newcastle Emlyn Scout Group is registered with Ceredigion Area). Since 2005 there have been no Districts in Carmarthenshire and the Area now operates as a single structure.[28]

The Area, covering the principal areas of Wrexham, Flintshire and Denbighshire, has sixty Scout Groups organised in four Scout Districts, with two having District Explorer Scout Units. The Districts are Flintshire, Llangollen District, Vale of Clwyd (Denbighshire) and Wrexham.[32]

There is a Scout Shop situated at the Wrexham District Scout Headquarters.[32] The County Camp Site, Gladstone Training Centre and John Clarke House, is located between Hawarden and Broughton.

The Area covers the Unitary Authority boundaries of the City and County of Swansea and Neath Port Talbot.[33] There were four Scout Districts: Afan Nedd, Cwm Newydd, Swansea and Swansea Gower,[34] but these were amalgamated into one district: Glamorgan West, at the end of 2007.[citation needed]

The Area has four Scout Districts, coterminous with unitary authorities of the same name: Blaenau Gwent, Monmouthshire, Newport and Torfaen.[35] [36] [37] The 25th Newport Air Scouts are the only Royal Air Force recognized Scout Troop in Wales.[38]

This Area covers the County of Pembrokeshire.

This Area covers the County of Radnorshire.

This Area, covering the regions of Snowdonia and the Isle of Anglesey, has three Scout Districts: Conwy, Gwynedd and Isle of Anglesey, with 31 Groups.[7] All of these Districts have Explorer Scout Units, and the Area currently hosts a Scout Network.

The Welsh Scout Council maintains two Welsh headquarters sites in Snowdonia: Yr Hafod - the specialist Mountain training centre situated in the glacial Ogwen Valley and Cornel, a large camping and indoor accommodation site situated on the banks of Llyn Crafnant, high above the Conwy valley. Both of these facilities are available to all youth organisations.[42] [43]

Cardiff and The Vale of Glamorgan Scout Area is responsible for Jubilee Fields [44], and has joint responsibility with Mid Glamorgan for Miskin Mill.[45]

Snowdonia and Anglesey Scout Area's Conwy District is responsible for the Rowen (Gwersyll Parc Mawr) site [60] Its history has been described on BBC Wales.[61]

There are some activity centres in Wales, run by English Scout Counties:

Retrieved from "http://en.scoutwiki.org/index.php?title=Scouting_in_Wales&oldid=34189"
Categories:
Cookies help us deliver our services. By using our services, you agree to our use of cookies.