Scouting and Guiding in Texas

From ScoutWiki, For Everyone, Everywhere involved with Scouting and Guiding...
(Redirected from Scouting in Texas)
Jump to navigation Jump to search

Scouting in Texas has a long history, from the 1910s to the present day, serving thousands of youth in programs that suit the environment in which they live. 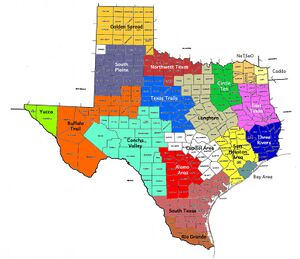 There are seventeen Boy Scouts of America local councils in Texas. All of Texas lies within Southern Region, except for El Paso, Hudspeth and Parmer counties, as part of Western Region.

Prior to 2007, there were 19 Girl Scout councils in Texas. However the councils have been merged and rearranged to leave a total of 7.

Other Scout associations in Texas

Most Girl Scouts of the USA units were originally segregated by race according to state and local laws and customs. The first troop for Mexican Americans was formed in Houston, Texas in 1922.

Retrieved from "http://en.scoutwiki.org/index.php?title=Scouting_and_Guiding_in_Texas&oldid=49860"
Category:
Cookies help us deliver our services. By using our services, you agree to our use of cookies.