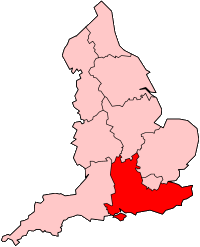 The Scout Association administers the region into 9 Scout Counties.

File:Royal Berkshire Scout County (The Scout Association).jpg
County badge as worn on the uniform of Scouting members in Royal Berkshire

Royal Berkshire is a Scout County concurrent with the ceremonial county of Berkshire, and provides Scouting opportunities for 7,500 young people and adults in the area. The County includes the towns of Newbury, Reading, Slough and Windsor, and their immediate environs.[3]

Management of Scouting in the County of Berkshire is currently divided into eleven Scout Districts:

The district map has been redrawn several time through the county's history, with the latest change at the end of 2005 to merge the district of East Reading into its two neighbours, Reading Central and Loddon.

Some aspects of Scouting are run cross-District, for example, Pang Valley and Reading Central have been running a shared Young Leader programme since late 2005, and the Explorer Scout Units have been running joint activities and events, too.[4]

WINGS is a major event which is open to all Scouts and Guides aged 10 to 25 in all parts of the world, and is normally held every 5 years in the County. It is a collaboration with Royal Berkshire Scouts and Girlguiding Royal Berkshire. Participants camp in Windsor Great Park, where many of the activities also take place. Other nearby sites are also made use of, such as Dorneywood Scout Camp and Wraysbury Lake.

The most recent event took place in August 2009 and provided an international experience with seven days of adventure, challenge and fun with opportunities to work with others from across the world and build new and lasting friendships. This was a year later than normal due to the World Scout Jamboree taking place in 2007.[6] 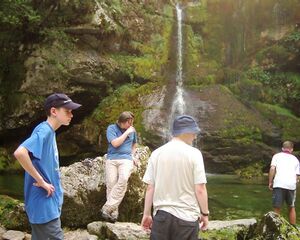 Members of Royal Berkshire resting whilst walking in Slovenia

The County has a tradition of International Expeditions, where Scouting members from the age of 14 are able to experience and participate in activities outside of the UK. There was a hiatus in these large-scale expeditions prior to 2004, mainly due to low interest from Scouting members. Interest has since grown considerably.

There was no expedition in 2007, because of the World Scout and Guide Jamboree.

Organised by Reading Central District Scouts in Royal Berkshire, the Three Towers Hike is a competition hike held around Easter following routes through West Berkshire and South Oxfordshire. Walking is primarily along the the Ridgeway, although it does not take in the full distance. The event takes its name from the three water towers passed on the main route.

There are three classes to allow participation of Scouts, Explorers and Adult walkers.

Participation is not limited to members of the Scouting Association.

Buckinghamshire Scout County is concurrent with the political county of Buckinghamshire. The County includes the towns of Aylesbury, Buckingham, High Wycombe, Marlow, and Milton Keynes.[7]

The county is currently divided into twelve Scout Districts:

Hampshire Scout Country is the largest in the United Kingdom, and consists of 27 Scout Districts.[8]

The 1st Lymington appears to the first Scout Troop in Hampshire in 1908. The 1st Eastleigh, 7th Bassett and 14th Highfield were formed in 1909. The Chief Scout, Robert Baden Powell toured Hampshire Scout troops in 1910. At that time there were 2,965 members in 104 troops in 22 Local Associations. The Grand Rally at Southampton Common on 2 October 1912, attended by Baden Powell, was recorded on film now available in the Hampshire Archives.

The Isle of Wight is served by a single Scout County, divided into two districts:[9]

File:Kent Scout County (The Scout Association).jpg
County badge as worn on the uniform of Scouting members in Kent

Kent Scout County is a Scout County of the Scout Association in the United Kingdom, covering the county of Kent.[10] It is divided into the following Scout Districts:[11]

The Loose + Swiss Scout Group in the Maidstone South District was started in 1908 by Jack Barcham Green a local Maistone business man.

Kent Scout county has over 16,000 members with an active Water Activities and Land Activities team. The Land Activities includes the Invicta Mountaineering Club. Other county level teams include the Hullabaloo Roadshow.

Every four years, Kent organises an international jamboree bringing scouts from all over the world to a location in the ocunty. The most recent was the gathering at The Shaws Guide campsite in Cudham, near Sevenoaks. 2,500 members of the scout association camped together for a week during the 2009 jamboree. The next will be in 2013.

The current logo for Scouts Oxon

Oxfordshire Scout County covers the county of Oxfordshire, and is divided into eleven districts:[12]

Surrey Scout County is concurrent with the political county of Surrey, and is divided into 19 districts:[13]

Buckmore Park Scout Centre[15] is a camping and activity centre located to the south of Chatham in Kent. The site is run by the Medway Towns District Scout Council.

Buckmore Park underwent significant development after the adjacent M2 motorway was widened in 1995, as a number of buildings were demolished and replaced with newer facilities.[16] On-site facilities included a swimming pool, a conference centre, an air rifle range, archery butts, a sports hall, a café, accommodation, a climbing tower, a caving network, and an assault course. However, despite the new facilities, the site entered into administration in 2003-04, and closed in 2005-06.

The site (excluding buildings) reopened in 2007. Scouting and Guiding groups of all ages are able to undertake a wide range of activities from camping and air rifle shooting, to caving and orienteering.

Also located on the site is the Buckmore Park Kart Circuit, although this is a separate business to the Scout Centre. The Buckmore Park sports complex on the site closed in April 2003 and went into administration in 2008. A buyer is being sought for the 260-acre site. The Scout Association said the local scouts had an existing lease on the site and would work with the new owners to secure a future for young people at the park.[17]

Longridge Scout Boating Centre is a water activity centre and campsite on the River Thames near Marlow in Buckinghamshire. It was once owned by the Scout Association but it is now an independent Charity. The centre provides water activities such as Bell Boating, Dragon boat, Canoeing, Rowing, Sailing, Kayaking and Powerboating. It also offers land based activities including Climbing, Team Challenge Zones and Disc golf.

With a very good safety record, Longridge is recognised amongst activity centres as being a leading training centre for young people and their leaders. It as an approved British Canoe Union centre and RYA (Royal Yacht Association) training centre. Each year the team at Longridge run a large number of courses ranging from basic beginner skills right through to advanced coaching and instruction.

Activities at Longridge are primarily aimed at young people, however when young people are not using the site, it is open to families and adult users. The Fire Service and Women's Olympic Rowing Team both train at the site. In addition they encourage local businesses to use the site for team development days.[18]

Youlbury is the oldest permanent Scout campsite in the United Kingdom, and acted as the National Headquarters when Gilwell Park was commandeered by the British Army during World War II.

There are three campsites within the County. Earleywood is the largest facility, while the other two (Paddicks Patch, based in Loddon District and just outside of the town of Woodley, and the 1st Burghfield & Sulhampstead Scout HQ, in the town of Burghfield and part of Pang Valley District) offer a single pitch with a fire-circle and a nearby hut.[20][21][22]

All three campsites are available to all members of the Scout Association for activities.

As well the Longridge Scout Boating Centre, Buckinghamshire Scout Association County is host to The Quarries Camping and Activity Centre

The Quarries is owned and operated jointly by the two Milton Keynes District Scout Councils. It is located near the village of Cosgrove on the northern edge of Milton Keynes. As well as a range of camping sites and indoor accommodation there is an indoor air rifle range, outdoor archery range and scoutcraft activities.[23]

In addition to Scouting activities, the Quarries also hosts many Girl Guiding camps and school parties during Duke of Edinburgh Award expeditions.

Ferny Crofts, in the New Forest near Lyndhurst, is owned by the county. It provides camping facilities plus indoor accommodation and activities including climbing, shooting, archery and a zip wire.[24] In 2009 Ferny Crofts became a National Scout Activity Centre.[25]

2007 Centenary celebrations were held at Walton Firs, with Carl XVI Gustaf of Sweden visiting during the camp.

The South East Berkshire Scout District started in 1970. It grew larger and moved to Camberley Civic Hall where it stayed until moving to the Wilde Theatre, South Hill Park, Bracknell. A show is produced every year in February. The Gang consists of around 180 people.

Hastings Gang Show started in 1966 and has been held continuously every year in November at the White Rock Theatre. The Gang in recent years has involved up to 150 young people from all sections including some members from the Guides. More information on www.hastingsgangshow.org.uk

Retrieved from "http://en.scoutwiki.org/index.php?title=Scouting_in_South_East_England&oldid=49862"
Categories:
Cookies help us deliver our services. By using our services, you agree to our use of cookies.