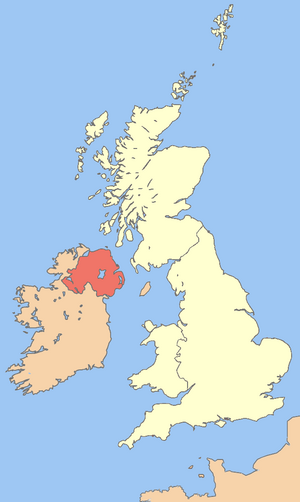 Scouting Ireland is part of Northern Scout Province and has five Scout Counties. Its Northern Province Commissioner is Wendy Marrow.[5] During the Troubles the number entering the Catholic Boy Scouts of Ireland skyrocketed as parents were eager for their sons to participate in Scouting rather than join the Provisional IRA like many young men of the time[citation needed].

The Scout Association of Northern Ireland and Scouting Ireland are running a Scout Citizenship project to improve the relationship between the two Scouting associations in Ireland.[6]

120 Northern Ireland Scouts, along with 12 leaders, took part in the 21st World Scout Jamboree to celebrate the 100th anniversary of Scouting at Hylands Park near Chelmsford, Essex in 2007.[7]

The Scout Association County of County Armagh covers the County of Armagh in Northern Ireland. The three Scout Districts are Lurgan and District, Armagh and District, and Portadown.

The Scout Association County of County Down covers the County of Down in Northern Ireland. The County Commissioner is Stephen Donaldon.[citation needed] The four Scout Districts are Ballynahinch and Downpatrick, Banbridge and District, Newry and District, Newtownards, and North Down.

The Scout Association County of County Fermanagh covers the County of Fermanagh in Northern Ireland. The County has no Districts and has just eight Scout Groups.

The Scout Association County of County Londonderry covers the city of Derry and the surrounding county of Londonderry in Northern Ireland. The three Scout Districts are Coleraine, Londonderry and Mid Ulster.

Down & Connor Scout County covers County Antrim, County Down and Belfast with a total of 15 Groups. The 2006 Phoenix National Patrol Challenge was held at Tollymore Forest Park Co. Down.[8]

Covers part of Counties Tyrone, Londonderry and Donegal with a total of 17 Groups.

Covers part of counties Tyrone, Londonderry and Antrim with a total of 9 Groups.

Retrieved from "http://en.scoutwiki.org/index.php?title=Scouting_in_Northern_Ireland&oldid=49958"
Categories:
Cookies help us deliver our services. By using our services, you agree to our use of cookies.