History of Scouting in East Midlands

Lady Olave Baden-Powell(1889-1977), the 'World Chief Guide' was born Olave St. Clair Soames at Stubbing Court, Wingerworth, near Chesterfield, Derbyshire. Her husband, Robert Baden-Powell, the Founder of Scouting, wrote part of Scouting for Boys in the week following 15 June 1907 at the Izaak Walton Hotel in Ilam close to Dovedale in Derbyshire. Scouting links with the hotel have continued since Baden-Powell's death. In the summer of 2008, for example, Derbyshire Scouting presented a plaque to the Hotel to mark its link with Scouting For Boys. [5]

Map of the UK highlighting the location of Derbyshire

Derbyshire Scout County is a Scout County of the Scout Association covering the administrative County of Derbyshire in England.[7] The town of Glossop in the far North West of the county is not included in the County but in the Greater Manchester East area instead.

Scouts from all over Derbyshire marked the centenary of Scouting in August 2007 at Sunrise ceremonies renewing their Scout Promise.[8]

Derbyshire villages are unusual in holding Well dressings during the summer. In 2005 the well at Whitwell had a theme acknowledging Peak 2005, Derbyshire's International Scout and Guide Camp at Chatsworth Park.[9][10]

Derbyshire Scout County is responsible for organising the Four Inns Walk, an annual competitive event over the hills of the southern Pennines, the Kinder Walk of approximately 29 km and the Kinder Challenge (new for 2008) of around 16 km.[11][12]

The County is now administered through three divisions for the North West, North East and South of the County, each with Division Commissioners.[13] It was previously divided into fifteen Scout Districts:-

In the 2007 Centenary year, the BBC investigated the relevancy of Scouting in Leicestershire.[18]

There is a Leicestershire Scouts Sub Aqua Unit (LSSAU), a Scout based diving group providing experience in diving and snorkelling for all members of the Scout Association. It was formed in 1982.[19]

In 2008, the Leicestershire Explorer County forum was started, to discuss Scouting issues in the county. This forum was responsible for the setting up of the county groups of the popular social networking site 'facebook'. Each district is represented by two of its Explorer scouts on the County Forum.[citation needed]

The Current County commissioner is Byron Chatburn, who started his 5 year warrant in 2009.

The County is split into eleven districts:

In 2007, the Centenary Year of Scouting, the County appointed local presenter and broadcaster Ian Cashmore as a Media Development Manager to actively promote Scouting activities through the media. He was also involved with national scouting media on Brownsea Island and the sunrise camp.[26]

The County is divided into ten districts:

The Lincoln District has a Scout Band.[31] It is the only Scout Band in the County.[32]

A Northampton Scout Amateur Radio Group was formed in 1981.[34]

The County is divided into six districts:

Map of the UK highlighting the location of Nottinghamshire

In 1980, a group of Cub Scouts from the 2nd Sutton St Mary’s troop wrote to the Television programme Jim'll Fix it asking to have a meal in an unusual place. The show sent them, complete with packed lunch, to ride the Revolution at Pleasure Beach Blackpool with hilarious results. The clip became one of the most requested on British television. The stunt was repeated in 2007 with the same former Cubs for Jim'll Fix It Strikes Again, with similar results.[41]

The County is divided into eleven Scout Districts:

Birch Hill Plantation in Bolsover is ideal for those wishing to walk the Peak District and the Sherwood Forest, with several local walks along old disused railway lines that are all linked to provide either long or short hikes in a traffic free environment. The site is 1-acre (4,000 m2) of grassland that is sheltered by woods and can camp up to 120 people.

Drum Hill is a 47-acre (190,000 m2) site located in Little Eaton that has three open areas for camping and a choice of three residential centres. Large enough to hold 1,000 campers, the site offers a number of activities including abseiling, archery, an assault course, climbing wall, mountain bikes, orienteering and shooting.

Gradbach is a greenfield site located near the village of Flash, the UK's highest village in the heart of the Peak District between Leek and Buxton. As well as large camping areas, there are two buildings available for hire - the Farmhouse and the Cottage.

Great Hucklow Scout Centre is a centrally heated converted playhouse located in Great Hucklow providing indoor accommodation for 54 people in a combination of bed and bunk bedded rooms and dormitories. It comes with a fully equipped kitchen, toilet facilities which include hot showers, lounge area, dining room and drying rooms. There is a grassed area outside suitable for games. The site is ideal to use as a base for those wishing to climb, cave, hike or mountain bike in the surrounding area.

Spitewinter is positioned on the edge of the Peak District National Park in Chesterfield. The site has 4 acres (16,000 m2) of sloping woodland with open camping areas. The camping areas are served by a purpose built ablution block, which has hot water and coin-operated showers. There are two accommodation huts, both of wood construction.

The Mill Pond is part of the North Leeds Estate. This back-to-basics site accommodates a maximum of six small tents. There are no facilities of any description offered on-site but would make a suitable overnight stop for a hiking party. It is operated by the Peak District National Park Authority.

Fox Coverts is a campsite between Leicester and Hinckley, roughly 1 km from Kirkby Mallory. Fox Coverts has been scout owned for almost 100 years, and is now managed by the Hinckley District Scout Council. Fox Coverts is a well equipped campsite with a 9m Climbing tower, traverse wall, Low Ropes, Spiders Web and fill archery and shooting ranges, as well as a large 'theatre like' campfire area, and a homely main building "The Wilson Building". Fox Coverts has numerous clearing style campsites of various sizes, and all with their own fire area.[46]

Johns Lee Wood is a woodland campsite, in the North West Leicester scout district. It lies near to the village of Markfield and is a stone's throw from Bradgate Park. The site has its own climbing tower, air rifle and archery ranges and a caving complex among other facilities, as well as several huts and clearing-style camping areas.[47]

The Oaks is located in the heart of Charnwood Forest, close to Oaks in Charnwood. It is a large field, with woodland along one side, and has a variety of activities available from climbing to archery, grass sledging to tunnel trail.

Ullesthorpe campsite is in South Leicestershire, and was once the home of Leicestershire Scouts Training. A mixture of woodland, huts and fields. 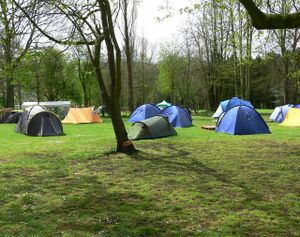 Willesley is a Scout campsite that was once a stately home near Ashby de la Zouch in North West Leicestershire. The hall fell derelict and was bought by the local Scout District in 1952 along with a small area of land. The hall was demolished and turned into a Scout campsite. Further land was later bought by the Scouts, with other areas becoming a fishing lake and a golf course. Willesley Campsite is located 1-mile (1.6 km) south west of Ashby de la Zouch, Leicestershire. It occupies 14 acres (57,000 m2) of the old Willesley Hall and estate from which part of the original gatehouse is still visible. The site has open fields, patrol areas, a coniferous wood its own church.[20]

Holwell Pastures is a field campsite north of Melton Mowbray and managed by Melton District.

The former Rutland County site at Shacklewell Hollow, on the A606 between Empingham and Stamford can camp up to 100 people in four and a half acres of grassland and woods.[50]

There are a number of Scout camp sites in the County including:[53]

Retrieved from "http://en.scoutwiki.org/index.php?title=Scouting_in_East_Midlands&oldid=34150"
Categories:
Cookies help us deliver our services. By using our services, you agree to our use of cookies.