Scouting has been active in displaced persons camps These Scout and Girl Guide groups often provided postal delivery and other basic services in displaced persons camps. This working system was duplicated dozens of times around the world. In the present, Scouting and Guiding once again provide services and relief in camps throughout war-torn Africa.

World War I and aftermath

At that time Estonia was part of Tsarist Russia. Latvian and Lithunian refugees founded Scout troops.

Scouts and Guides cared for refugees of conflicts after World War I (i.e. Polish-Soviet War).

From September 17 to 21, 1948 the DP Scouts of Tyrol and Vorarlberg held a Scout camp in Rinn, Tyrol. 265 persons, including 85 Girl Guides, took part. The service team members were displaced Rover Scouts. The camp leaders were the Traveling Commissioner for D.P. Scouts in Germany and Austria J. Monnet, three Ukrainian Scouters, one Hungarian Scouter and a Scouter of the DP-Scout group of Haiming.

There were three subcamps:

"The Polish Rovers at Lubeck were by no means the only displaced persons who turned to Scouting as the solution to their troubles. The report of the American, Harry K. Eby, on Scouting in the displaced persons' camps of the United States Zone shows that by 1946 seven major nationalities had established Scout Committees and were doing their utmost to supervise the work of their groups throughout the zone and in places beyond it. The program which they drew up, consisting as it did of training courses, conferences, the collection of literature, the publishing of Scout magazines and the passing of tests for badges, was, he notes, comprehensive and of fine quality. At Camp Esslingen, for example, he discovered that 165 Latvian Scouters had drawn up a well-planned program for training Scoutmasters, Scouters and Commissioners, while at Augsburg the Ukrainian Scouts to the number of 728 had celebrated the thirty-fifth anniversary of the founding of Scouting in their country. Russian Scouts of the Greek Orthodox Church had built up "an extensive and long-standing organisation," and the Poles and White Ruthenians in the zone were equally active. These various organizations were fortunate enough to receive a supply of Scout literature from the World Friendship Fund which, among other books, sent several hundred copies of Aids to Scoutmastership. They were much appreciated..."

"Scouting continues among the displaced persons in the French and British Zones in Germany, having followed the same lines as those which have proved so successful in the United States Zone. "Our best effort was quite unintentional," reports the British Governor of a colony of 15,000 Poles housed in eight villages close to Minden. "A few weeks ago I discovered a few Boy Scouts and arranged a meeting for them. We have now got 800 Scouts and about 400 Girl Guides, with a waiting list of as many again. They are as keen as mustard. When I went to a German clothing manufacturer and ordered a thousand Scout uniforms he thought I was mad but he made them."..." 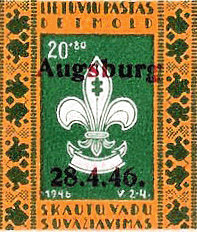 In the years after World War II, the DP Scouting movement provided a makeshift but quite effective camp postal system using Scout postage stamps like the one illustrated.

There were Polish Scout troops in refugee camps during World War II.

In Liechtenstein Scouts helped refugees by collecting donations and food for the refugees.

German Catholic Scout groups existed in prisoner of war camps in the United Kingdom and France.

In POW Camp 273 at Debach Airfield (near Ipswich) existed a German Catholic Scout group from 1946 to 1948. This were the same Scouts as in Fort Devens.

Scout groups including Germans and Austrians existed in several Prisoner of war camps of the western Allies.

In refugee camps in Vichy France for Belgian refugees were active Scout groups.

Internment camp on Isle of Man

In a internment camp for Germans on the Isle of Man a Scout group was active.

The Polish Scout Headquarters moved first to Paris in 1939 and then to London. There were Polish Scout groups in Great Britain during World War II and afterwards. There were not only Polish there where also French, Czechoslovakian, Yugoslavian and others. They had strong ties to their Governments in in Exile.

There were Estonian Scouts and Guide groups founded in reception camps in 1944.

German Catholic Scout groups existed in prisoner of war camps in the United States. Examples include: A German Catholic Scout group existed from 1945 to 1946 in the POW camp Fort Devens. Founded by former members of the DPSG, encouraged by the priest Eberhard Droste. The Scouters were Meinrad Much and a German comrade. Much had been a Scout in the DPSG between 1933 and 1936. There were 20 Scouts, aged between 18 and 22. This group was part of the Catholic camp parish. Another group was the Kolpingfamilie. Together with the Lutheran camp parish and the Kolpingfamilie the Scouts collected money to help Germany and consigned 10,000 dollars to the Caritas. An important day for the Scouts was their Confirmation. It was celebrated by the Archbishop of Boston. 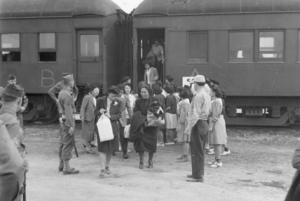 A 5-day Boy Scout camp on the bank of the Mississippi River was composed of nearly a hundred boys from the Rohwer War Relocation Center, together with a small troop from the nearby town of Arkansas City. August 1943

Boy Scouts of America units were at all ten War Relocation Authority (WRA) Japanese American internment centers during World War II. Girl Scouts of the USA units were also at most of these camps. Both Boy Scouts and Girl Scouts were also at many of the camps not run by the WRA. Internees at the Granada War Relocation Center set up a separate Amache District for Scouts at the camp, after the camp's unofficial name Camp Amache. Camp leaders, internees themselves, set up the system. On December 06, 1942, one of the pro-Japanese internees at Manzanar started rushing towards the flagpole to tear down the American flag. A group of Japanese American Boy Scouts, surrounded the flagpole and armed themselves with stones the size of baseballs, refusing to allow the flag to be taken down.

Between 1944 and 1946 there was an international Boy Scout troop in Oswego, N.Y whose members were young Jewish refugees from Europe. It was Troop 28 of the Boy Scouts of America and its Scoutmaster was Harold D. Clark. There were also a Cub Scout pack and a Girl Scout troop located there.

In 1939 the United Rovers were founded by the Austrian Scouter Fredy Mittler in Shanghai. This group consisted of Austrian and German émigrés. It was affiliated to the The Boy Scout Association. At the end of World War II there were 120 members.

Refugees from Poland during World War II had Scouting activities such as summer camps organized by Polish Scouters. There were also Scout troops and Guide companies. This groups were part of Związek Harcerstwa Polskiego. The were under the jurisdication of Z.H.P. National Committee in London.

Malaysia, Indonesia and the Philippines 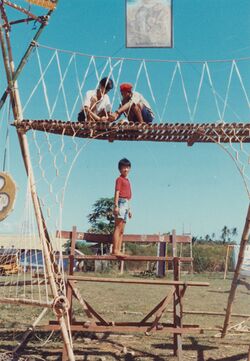 There were Scout groups in refugee camps for Vietnamese refugees after the Vietnam War (1960-1975), who received support from the UNHCR.

"In Africa alone the Z.H.P.National Committee in London catered for some 4000 children in 51 Guide companies, 27 Scout troops and 61 Cub Scout and Brownie packs."

Refugees from Poland during World War II founded Scout groups in Northern Rhodesia. They worked together with the British Scouts there. For example: "At Lusaka there were soon 88 Polish Scouts and 102 Guides and brownies."

Estonian Scouts have been present at every World Scout Jamboree and Rover Moot, although after World War II, they were compelled to arrive and participate in these events with contingents of other countries. The only exceptions were the World Jamboree at Moisson in 1947 in which 36 Estonian DP-Scouts from Germany took part under the Estonian colors; and the Jubilee Jamboree at Sutton Park, England, in 1957, where it was possible for Estonian Scouts to fly their own flag in the camp allotted to the Council of Scout Associations in Exile. Hungarian Scouts have been present at the World Jamborees in 1947, 1951, 1955, 1957, 1959, and 1963. In 1951 the Hungarian Scouts were members of the Austrian and German contingents. In 1957 40 Hungarian Scouts were members of the Austrian contingent. The Hungarians were also represented in the camp allotted to Council of Scout Associations in Exile the at the JIM in 1957. The Association of Armenian Scouts have been present at many international Scouting events, including World Jamborees and Rover Moots.

In the 7th World Jamboree in 1951 Scouts-in-Exile and DP-Scouts from Hungary, Latvia and Lithuania participated as part of the German contingent. Scouts-in-Exile from Russia, Lithuania, Latvia and Hungary stayed at Subcamp 4 "Niederösterreich". A Displaced Persons Troop stayed at Subcamp 6 "Steiermark." At the 9th World Scout Jamboree the Council of Scout Associations in Exile, ZHP-in exile and the Association of Armenian Scouts were represented. The Council of Scout Associations in Exile camped at Subcamp Copenhangen and included Scouts-in-exile from Hungary, Russia, Lithuania, Latvia, Estonia and Ukraine.

The International Scouter Association was founded during a Scout conference in March 1947 in Mittenwald. The founders were German and Scouts-in-exile. The seat was in Munich.

The World Association Training scheme was a Guiding activity after World War II. Mona Burgin was the leader of the first team briefed to find and support Guides living in displaced persons' camps. After the team's first tour of duty, General Sir Evelyn Fanshawe, at that time in charge of the U.N. relief operation in the then British Zone of Germany, "remarked that, in his opinion, Scouting and Guiding were the most rehabilitative factors at work in the camps at that time." Elizabeth Hartley followed Burgin as leader of the team.

"The GIS was one of the approved organisations to provide teams to work with displaced persons and refugees under the umbrella of the British Red Cross, the British Army and the United Nations relief and rehabilitation administration. From 1945 teams of women were formed to undertake medical, catering and canteen duties, establishing feeding schemes in camps; providing hospital equipment, medical supplies and disease control, as well as food and general relief supplies, saving thousands of lives. In 1947 repatriation and emigration schemes were established. 1951 brought the inauguration of education, adoption and parcels schemes. The service was disbanded in 1952 with any remaining funds being distributed to further assist displaced persons.". 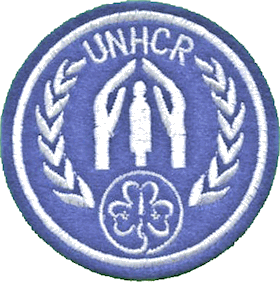 Scouting and Guiding maintain work for and with displaced persons today, as with the work of World Association of Girl Guides and Girl Scouts with the United Nations High Commissioner for Refugees.

Today there are Scout groups in Palestine Refugee camps.

Retrieved from "http://en.scoutwiki.org/index.php?title=Scouting_and_Guiding_in_displaced_persons_camps&oldid=26143"
Categories:
Cookies help us deliver our services. By using our services, you agree to our use of cookies.