The Scout and Guide Association of Qatar

The Scout and Guide Association of Qatar (جمعية الكشافة والمرشدات القطرية) is the national Scouting and Guiding organization of Qatar. Scouting was founded in Qatar in 1956 and became a member of the World Organization of the Scout Movement in 1965; the organization is also a member of the World Association of Girl Guides and Girl Scouts. It serves 3,501 Scouts (as of 2004) and 1,916 Guides (as of 2003). The Scout president facilitated the building of the local zoo.

Program emphasis is on out-of-school education in religion, citizenship and health as well as the usual Scout crafts, physical fitness and community service.

There are Scout courses in wildlife conservation and projects for increasing plant life.

Guiding was started in 1995, thanks to the present government, which issued a decree and accepted the formation of the Guiding movement. Immediately, the Guides joined the Scouts and The Scout and Guide Association of Qatar was established. The Minister of Education has recruited six Commissioners to promote Guiding as an extracurricular activity in all schools. All leaders are teachers in the schools.

Guiding is rapidly gaining a high profile in society, reflected in their membership. Members come from different areas and various sections of society. Guiding mostly operates from Doha, however some units have started in different parts of the country. Membership stood at 2,011 as of February 2002.

There is a special program for Sea Scouts who are trained in all water and boat activities. There is also a small Air Scout section.

The Scout Motto is "Kun Musta'idan" or كن مستعدين, translating as "Be Prepared" in Arabic. The noun for a single Scout is Kashaf or كشاف in Arabic. 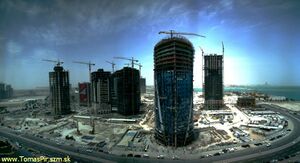 In addition, there are American Boy Scouts in Doha, linked to the Direct Service branch of the Boy Scouts of America, which supports units around the world, as well as Girl Scouts of the USA and British Scouts.

Retrieved from "http://en.scoutwiki.org/index.php?title=The_Scout_and_Guide_Association_of_Qatar&oldid=49714"
Categories:
Cookies help us deliver our services. By using our services, you agree to our use of cookies.