Scouting and Guiding in Nunavut 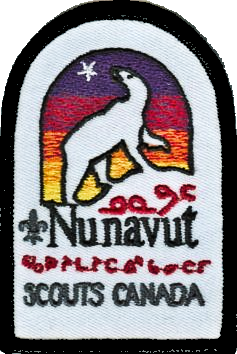 Scouting in Nunavut did not develop until 1970, as a section of the Northwest Territories.

The Northwest Territories Council of Scouts Canada was founded in 1970, with Denny R. May as Executive Director. May also designed the logo for the Council, which depicts three Inuit in a circle with their hands linked in brotherhood. The Nunavut-specific design borrows the polar bear from the local government.

When the Northwest Territories was divided and the new territory of Nunavut was created in 1999, the Council was renamed as the NWT and Nunavut Council. This Council later merged into the Northern Lights Council of Alberta in the early 2000s.

Guides are served by the Guiding in Canada - Northwest Territories & Nunavut Council.