Scouting and Guiding in Kyrgyzstan

From ScoutWiki, For Everyone, Everywhere involved with Scouting and Guiding...
Jump to navigation Jump to search
File:--KyrgyzstanScoutChrisFitch.jpg
Membership badge of Scouting in Kyrgyzstan

Scouting in Kyrgyzstan was founded in November 1994 and is not yet a member of the World Organization of the Scout Movement, but is working toward WOSM recognition. Kyrgyzstan has multiple Scout associations, several of which are members of Kyrgyz Respublikasynyn Skaut Kengesh, the Kyrgyz Republic Scouting Union.

The goals of the Kyrgyz Republic Scouting Union federation are the creation of a Kyrgyz Scout Movement with a uniquely Kyrgyz character, guidelines for Scout membership and for training of leaders and application to the World Organization of the Scout Movement (WOSM). Among the multiple organizations, some are separated by gender, some for boys, others for girls, and yet others coeducational. Various Scout factions in Bishkek agreed in 1995 that they wanted light blue uniforms, as light blue is the Kyrgyz color of courage and generosity (see also Mongolyn Skautyn Kholboo), and several world Scouting alumni organizations offered to make uniform insignia for the fledgling Kyrgyz Scouts, free of charge.

As far as is known, Scouting was not introduced to the region during the khanate period of the pre-Soviet era. 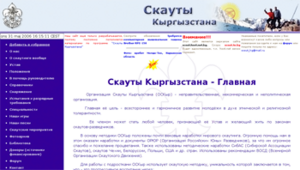 On October 29, 2004, six Scouts of Kyrgyzstan posted an official website for their organization after a weeklong Web design course at the Internet Access and Training Program (IATP) access site in Bishkek. The website contains pages about Scouting's mission, the history of Scouting in Kyrgyzstan and some of its activities, a copy of the organization's charter, a photo gallery, list of donors, a forum, and contact information. Организация Скауты Кыргызстана (ОСКыр) leader Evgeniî Shmelëv (originally leader of the Speleoklub "Надежда", the "Hope" Sporting Association, an early precursor to Scouting locally) remarked, "The Scouting movement in Kyrgyzstan is in its initial stage, and we hope to unite people who have common interests and enthusiasm under one identity called 'Scouts'. Moreover, we hope to get support from Scouting movements of foreign countries through the website." The Scouts have pledged to keep their website updated and maintain it as a dynamic, living online resource.

It is reported that total registered membership is 300. In 1998-1999, a contingent from Kyrgyzstan planned to attend the 19th World Scout Jamboree in Picarquín, Chile.

The Scout Motto is "Dayar Bol", translating as "Be Prepared" in Kyrgyz, and "Bud' Gotov", translating likewise in Russian. The noun for a single Scout is Скаут in both languages.

With the 1991 breakup of the Soviet Union, it was suggested that the Türkiye İzcilik Federasyonu assist in the creation of Scouting movements in the Turkic Central Asian republics of Kazakhstan, Kyrgyzstan, Turkmenistan and Uzbekistan, but it is uncertain if this plan ever materialized.

Some of the multiple organizations sponsoring Scouting activities in Kyrgyzstan include

Kyrgyzstan's Scouts have an international relationship with Pikes Peak Council in Colorado.

Update distilled from the IATP website. The Internet Access and Training Program (IATP) is a program of the Bureau of Educational and Cultural Affairs (ECA), US Department of State, funded under the Freedom Support Act (FSA). IATP is administered by the International Research and Exchanges Board (IREX).

Retrieved from "http://en.scoutwiki.org/index.php?title=Scouting_and_Guiding_in_Kyrgyzstan&oldid=30690"
Categories:
Cookies help us deliver our services. By using our services, you agree to our use of cookies.