Scouting for boys was started in the Netherlands in the summer of 1910 when the first Scout troops were formed in a few cities. Scouting started about a year later for girls. Dutch Scouts were among the founding members of World Association of Girl Guides and Girl Scouts in 1928 and also among the charter members of the World Organization of the Scout Movement in 1920.

On 7 January 1911 the first national organisation was founded, the Nederlandsche Padvinders Organisatie (NPO, Netherlands Pathfinder Organisation). They merged with the Nederlandsche Padvinders Bond (NPB, Netherlands Pathfinder Federation) on 11 December 1915 and became known as De Nederlandse Padvinders (NPV, Netherlands Pathfinders). In 1933 some Scout Groups broke away from the NPV to form the Padvinders Vereniging Nederland (PVN, Pathfinder Association the Netherlands), because difficulties concerning the Scout Promise arose. The difficulty was that boys who recognised no god still had to promise "To do my duty to God and my country". The Scout Groups found that one grew hypocrites this way. The NPV and the PVN almost reunited in 1940. The PVN was not refounded after World War II. Although the NPV was open to boys of all religions, a Roman Catholic organisation was founded in 1930, the Katholieke Verkenners (KV, Catholic Scouts). First inside the NPV, but after 1938 as a separate organisation. After World War II the Roman Catholic Church wanted to merge all Roman Catholic youth organisations. After negotiations the Katholieke Verkenners were allowed to go on as Verkenners van de Katholieke Jeugdbeweging (Scouts of the Catholic youth movement). The Katholieke Verkenners became a separate organisation again in 1961.

Girls got their first own organisation in 1911, Eerste Nederlandsche Meisjes Gezellen Vereeniging (E.N.M.G.V., First Dutch Girls Companions Society), but this organisation never got many members. Girls had also been member of the NPO but the NPV was boys only. On 16 January 1916 the Het Nederlandsche Meisjesgilde (NMG, Dutch Girls Guild) started, which later changed its name to Het Nederlandse Padvindsters Gilde (NPG, Dutch Girl-pathfinders Guild), followed in 1945 by the founding of a separate Catholic organisation, the Nederlandse Gidsenbeweging (NGB, Dutch Guide Movement), which later changed its name to Nederlandse Gidsen (NG, Dutch Guides).

During World War II all Scouting movements were prohibited and officially dissolved in the Netherlands, because the organizations refused to merge with Youth Storm, the Dutch National Socialist youth organization. Still, many continued their activities secretly. After the end of the war, Scouting again became very popular and therefore many of the current local Scout Groups in the Netherlands were founded in 1945 or 1946.

The four separate organisations (NPV, KV, NPG and NG) existed until 1973, when they all merged into Scouting Nederland (SN).

The emblem of "De Nederlandse Padvinders" consisted of a Fleur-de-lis and a banner with the Scout Motto "Weest Paraat" . The emblem of "Het Nederlandse Padvindstersgilde" (NPG) consisted of a ten point white star for the ten lines in the Girl Scouts law on a blue Trefoil for Girl Scouting/Guiding with the Scout Motto "Wees Bereid", variants are still in use by Het Surinaamse Padvindsters Gilde, Het Arubaanse Padvindsters Gilde and Padvindstersvereniging van de Nederlandse Antillen. Before 1936 the NPG had the same emblem with an eight point star because of an eight point law. Het Nederlandsche Meisjesgilde had the same emblem with an eight point star but with the letters NMG. The emblem of the "Katholieke Verkenners" , consisted of a Fleur-de-lis for Boy Scouts, on a cross potent for Catholic Scouts, a variant was used by the Katholieke Verkenners Suriname. The emblem of the Nederlandse Gidsen (Beweging) consisted of a light blue Trefoil for Girl Scouting/Guiding on a yellow Cross potent for Roman Catholic Scouting/Guiding, a variant is still in use by the Gidsen Suriname.

The Scout Motto is in not much use after the merger. The Motto before the merger was for Cub Scouts was Doe je best, for Boy Scouts Weest Paraat and for Girl Guides Wees Bereid.

The Dutch Scout Promise is one of the few in the world where the reference to God is optional. It makes the Netherlands an exception to the WOSM guidelines. The Constitution of WOSM states that the Promise should include a reference to Duty to God,[3] but six countries, including the Netherlands were granted the right in the 1920s by Lord Baden-Powell to additionally use an alternative promise without a reference to God.[4] WOSM decided in 1932 that no new exceptions would be made and expressed the hope that the few remaining countries would stop using any promise lacking a reference to Duty to God.[4]

All Dutch Scouts pledge faith to the Scout Law in their Scout Promise.

In the Netherlands, most Scout groups are regular Scouts, but special programmes have been developed also for Water Scouts and Air Scouts. Apart from the standard age groups, Scouting in the Netherlands has a separate division for handicapped members, called the Blauwe Vogels (BV, (Blue Birds) or Bijzondere Eisen (BE, Special Needs).

The Crown Scout rank was the highest a Boy Scout could achieve in the Netherlands, until the mid 1970s. 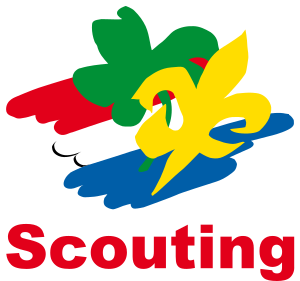 The age group for ages 5 to 7 is called Bevers (Beavers).

For ages between 7 to 11 the programme is called Welpen (Cubs). Until 2010 there were also Kabouters (Brownies), mostly for girls and Esta's for co-educational groups. These programmes and the "Dolfijnen" are being replaced by a redesigned Welpen programme with a second main character, the girl Shanti, and more water animals.

The age group for ages 15 to 18 is called Explorers, but often the old, now unofficial, names Rowans for boys and Sherpa's for girls are used.

The age group for ages 18 to 21 is called "Roverscouts", before 2010 "Jongerentak", but more often the name "stam" (crew) is used or the old, now unofficial, name Pivo's" (Pionier(st)er/Voortrekker Ranger/Rover)

The age group above 21 is called Plusscouts.

In the Netherlands there are about 300 [6] Sea Scout Groups. Because the dutch scouts are sailing on all kinds of water (not only "Sea") they speak about "Water Scout" instead of Sea Scouts. Approximately 32 % of the Water Scouts are girls. The total fleet of all Dutch water scout groups consists of 54 guard ships, 120 tugboats and motorboats, 100 Lelieschouwen, 1,550 Lelievletten (iron sailboat for 6 persons) and 40 Juniorvletten (smaller size of the Lelievlet). Sea Scouting has its own sections for many age groups, but Cub Scout and Beaver Scout Sections can also be a part of the Group. Officially, there are specialized water scout programs for 12 years and older.

Until 2010 there was a special water programme for age 8 to 11, Dolfijnen (Dolphins). This is being replaced by a redesigned Welpen programme with a second main character, the girl Shanti, and more water animals.

Members are called Water Scouts from 12 to 16 years or more often Zeeverkenners, a unit is referred to as Wacht (Watch). The adult leaders are called Schipper (Skipper) and Stuurman (Coxswain). A patrol is called bak, its leader Boots(man) and his/her assistant Kwartiermeester. Water Scouts (which number 5,400 in the Netherlands) use Juniorvletten or Lelievletten.

The (Matrozen ter) Wilde Vaart (sailors of the high seas in English) are the Sea Scouting version of Explorers, a unit is referred to as Afdeling Wilde Vaart uses Lelievletten or Lelieschouwen. The 1,400 members are aged between 16 and 18 years.

Being not very common, there are only about 15 Air Scout groups in the Netherlands. At the scouts age (10-15), they are called Luchtscouts or Luchtverkenners and Air Scout Explorers are called Astronauten (Astronauts).

The Northern Pinkster Camp (Dutch: Noordelijk Pinksterkamp or NPK) is a Scouting camp held on the military practice terrain Marnewaard in the province of Groningen. The camp is held every year at Pentecost. The camp is held for members of Scouting Nederland from the northern Netherlands provinces of Friesland, Groningen and Drenthe.

The Northern Pinkster Camp is the largest annual Scouting camp of the Netherlands and one of the largest of the whole of Europe[7]. In 2007 when the camp was held there were almost 3500 participants. 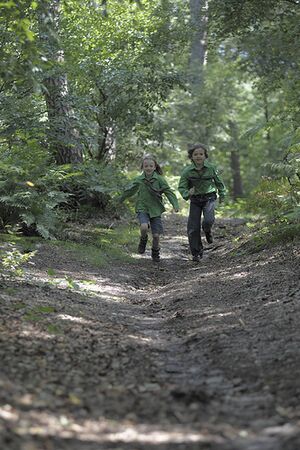 The official uniform of all Scouts in the Netherlands consists of blue trousers, a light blue t-shirt, a light blue sweater or a shirt, a neckerchief that is different between Scout Groups and optionally a cap. The shirt differs between the different age groups, the ages 5 to 8 can wear a red shirt, the ages 7 to 11 a light green shirt, the ages 10 to 15 a khaki shirt and the ages above 14 a dark red/violet ("brick") shirt. Apart from that, all Sea Scouts can wear a dark blue shirt and all Air Scouts can wear a light gray shirt.

International Scouting in the Netherlands

The Netherlands has hosted the international World Scout Jamboree twice. The fifth World Jamboree was held in Vogelenzang, Bloemendaal municipality, in 1937 (which was the last World Jamboree attended by Robert Baden-Powell himself) and the 18th World Jamboree in Dronten in 1995.

Besides the World Jamboree, the Netherlands has hosted the European Scout Jamboree in 1994, has organized the Dutch National Jamboree (which is open to foreigners) in 2000, 2004 and 2008 and every 5 years a National Jamboree for Sea Scouts Nawaka (national water camp). In addition, several smaller jamborettes and international camps are held regularly in the Netherlands, amongst which the Haarlem Jamborette,[8] Marsna Jamborette[9] and since 2001 the Nederweert International Camp for European Scouts (NICES).[10]

From early 1954 until 1995, Troop 18 of the Transatlantic Council of the Boy Scouts of America was active at Camp New Amsterdam, near Soesterberg. Camp New Amsterdam was a U.S. Air Force base that was closed in 1995. There was also a troop at the NATO Headquarters in Brunssum. Today there are troops in The Hague, Schinnen and Amsterdam.[11] American Girl Guides are served by USAGSO headquarters[12] There are units of Girlguiding UK,[13] The Scout Association,[14] Scouts Canada[15] and Külföldi Magyar Cserkészszövetség.[16]

all of which share a common history with Scouting Nederland

Retrieved from "http://en.scoutwiki.org/index.php?title=Scouting_Nederland&oldid=49913"
Categories:
Cookies help us deliver our services. By using our services, you agree to our use of cookies.