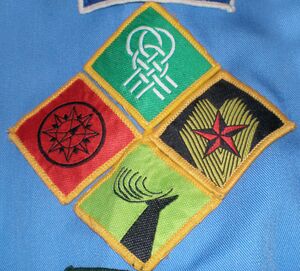 The Scouting Ireland progressive badge scheme. "The pathway to the Chief Scout's Award"
File:CSA.jpg
A member wearing the CSI Chief Scout's Award. Note that it does not bear the World Crest, meaning it was awarded before January 1, 2004

The Chief Scout's Award is the highest award for Scouts in Scouting Ireland. It is currently confusing as to what exactly the Chief Scout's Award is in Scouting Ireland as a hangover from the merger of CSI and SAI. It is the final step in the personal progressive scheme of the former CSI. The SAI used it as an award to be achieved in tandem with the progressive badge scheme.

The Chief Scout's Award is a truly individual recognition of commitment to the Scout Law, dedication to attain personal ambitions and the desire to contribute to and to improve society. Chief Scout's Award holders have often been received at Áras an Uachtaráin by the President of Ireland, most recently in 2004 by Mary McAleese, who is the Patron of Scouting Ireland. It is estimated that about 1 in 300 Scouts achieve the award, giving it the name; "1 in 300 award" The first recipient was William Cronin, 1st/4th Tipperary (Clonmel), Cois tSuire County. [1]

History of the Chief Scout's Award

It was introduced by Catholic Boy Scouts of Ireland in the early 1960s to replace the Silver Palm Award. The first awards were presented by Chief Scout CJ "Kit" Murphy.

Scouting Ireland S.A.I. also awarded a Chief Scout's Award, with successful applicant receiving a cloth badge, a certificate signed by the Chief Scout, and a special neckerchief on Founder's Day in the Mansion House, Dublin.

Since the foundation of Scouting Ireland, award recipients have been presented with a pendant (See Award section below)

Requirements for the CSI pathway include the earning of merit badges and the completion of the personal progressive scheme (the Tracker, Explorer, Star and National Scout Awards).

Requirements for the SAI pathway include that the Scout has reached 14 years of age and that it is a personal challenge to that Scout. The award can be taken at any point in the personal progressive scheme.

On this pathway, Scouts complete a personal project. The Scout meets with the Chief Scout, or his representative, and discusses his or her own interests and a project is derived from the candidate's own individual goals. More often than not the project does not directly relate to Scouting. It always, however, relates to one of the development trails which Scouting identifies as crucial to personal growth and achievement; these being personal, spiritual, physical, emotional, social, intellectual and character development. Projects vary widely, from community projects to local history studies and from putting on exhibitions and shows to raising awareness of charitable causes. Key to this pathway is planning, identifying a goal, endeavouring to attain that goal and finally evaluation of the project as a whole.

Scouts with their Scout Leader agree their own challenges in each of the six categories. The challenges are recorded on the form.

The Scout Leader should ensure a suitable STANDARD OF THE CHALLENGES is achieved by verifying that the challenges have been set in accordance with the criteria laid down below and then sign this form before it is sent to National Office.

The standard of the challenges should be relevant to the Scout's ability and the quality of Scouting in the Troop, so that they are both challenging and achievable.

Plan and organise an expedition by foot, bicycle, boat or canoe of at least two nights' duration covering either:-

The expedition should be planned under the supervision of your Scout Leader and all safety precautions for the various disciplines must be adhered to.

Plan and lead a day activity such as a hike, cycle or boating trip for other members of your Troop producing route cards, maps, safety considerations and emergency procedures. The activity should have a novel programme on route, eg. orienteering, dusk to dawn, historical visit etc.

Only the planner or organiser may count this towards their Chief Scout's Award.

Lead the construction of one of the following items, which you have not constructed before:-

Undertake an environmental project in the form of an activity, research or survey relevant to your local area or an area in which your Troop does most of its Scouting. This could be a campsite, woodland, park area, open land, beach or coastline with which you are familiar.

Set yourself a personal challenge, not necessarily part of your normal scouting activities and not part of your school work, which you will endeavour to achieve during your year completing the Chief Scout's Award. This could be learning a new activity or skill or raising a current interest to a new level and you must be able to illustrate proficiency in a new interest or progress in an existing one.

Achieve or have achieved one of the following qualifications as part of your Chief Scout's Award:-

The Chief Scout will assess the challenges, once completed, upon presentation of the Scout's Logbook.

The award consists of a Connemara marble pendant with the World Crest embedded and a red rope finished with wooden beads at the end. Interestingly the wooden beads on many award pendants to this day have swastikas carved in recess, see swastikas and Scouting. It seems that the presence of the carvings depend on the manufacturer.

Prior to 2004 before the merging of CSI and SAI, instead of the World Crest, the beads on the CSI award were embedded with the Cross and Shamrock and it was accompanied by the Chief Scout's Award woggle which bore the insignia of the Chief. The pendant is worn around the neck and is the only youth award to do so.

It currently is the only youth award in fact which does not take the form of a cloth badge. When Scouting Ireland settles on a new emblem design, it is planned to also have a cloth badge as part of the award. Only the Woodbadge beads and the Order of CúChulainn may be worn around the neck by members. Those who hold the Chief Scout's Award are entitled to wear it for life.

It can be compared to the Boy Scouts of America's Eagle Scout award and the Gold Award of the Girl Scouts of the USA.

Other youth organizations have similar awards, such as the Gold Medal of Achievement (Royal Rangers).

Retrieved from "http://en.scoutwiki.org/index.php?title=Scouting_Ireland_Chief_Scout%27s_Award&oldid=30334"
Categories:
Cookies help us deliver our services. By using our services, you agree to our use of cookies.