The Scout section is the direct descendant of the original Scout Patrols which formed The Scout Association of the United Kingdom in 1908. The section is open to both boys and girls between the ages of 10-14 years, and are now formed into local Scout Troops.

Scout Troops form part of a Scout Group. The Scout section follows on from the Cub Pack (8-10 year olds) and Scouts will move onto the Explorer Scout section at the age of 14.

A general Scouting programme is adopted by Scout Troops, but it is possible for specialist troops to be formed. Sea Scouts and Air Scouts are example of specialist programme troops. 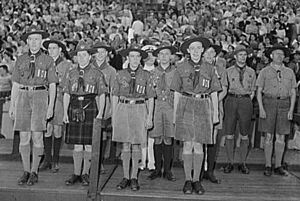 The Scout Troop forms the senior section of Scout Groups. Since the programme review in 2003, this section is open to 10-14 year olds. The Troop is the longest running section within the UK organisation, although it was originally termed the Scout Patrol when the movement started in 1907.

Most Groups will have one Troop, while some others may be able to support two or even more, depending on the numbers of Scouts within the Group. This is quite rare, as new Groups would be created in areas of large Scouting populations.

Scout Troops have an adult leadership team consisting of a warranted Scout Leader and one or two assistant leaders. They can also be supported by adult helpers or Young Leaders.

The Scouts within the Troop are separated into Patrols, ideally of 6-8 members, with a Patrol Leader and an Assistant Patrol Leader. These positions are usually filled by Scouts who have shown an ability to be responsible and pro-active. Some Troops may also hold a position for a Senior Patrol Leader.

Within the Troop, the Patrol Leaders can hold a council and are able to plan and run activities under the supervision of the Scout Leader.

The Scout District may also hold a council for representative Patrol Leaders from each Troop to attend.

The Membership Award is only actually received by young people new to Scouting, whereas those Scouts who have joined from a Cub Scout Pack will undertake the Moving-On Award.

However, the Awards cover the same basic principles, and many Troops will have all new Scouts participate in the Membership Award, regardless of how they came to join the Section.

Scouts continue the Scouting programme of Progressive Awards. The requirements of each stage become more challenging, reflecting the age and abilities of the young people undertaking the Awards.

Scouts are offered the Chief Scout's Gold Award as their section of the Awards programme.

The award requires that the Scout participating demonstrates community, faith, self-motivation, personal discipline, and many other qualities.

The Scout Programme includes many other activities - too many to fully list. The most common activities are:

All Scouting activities are properly supervised by qualified intructors for that activity.

Retrieved from "http://en.scoutwiki.org/index.php?title=Scout_Section_(UK)&oldid=30946"
Categories:
Cookies help us deliver our services. By using our services, you agree to our use of cookies.