San Luis Rey River Bike Trail is a paved path, for bicycle and pedestrian use, that follows the San Luis Rey River in Oceanside, northern San Diego County, California. The 9 miles (14 km) paved class one bike route is an easy and relatively flat and straight ride.

Its entire length is separated from all vehicular transportation, there are no at-grade street crossings, traffic signals, or stop signs along it. 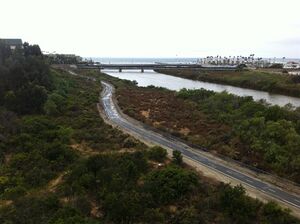 Retrieved from "http://en.scoutwiki.org/index.php?title=San_Luis_Rey_River_Bike_Trail&oldid=49012"
Categories:
Cookies help us deliver our services. By using our services, you agree to our use of cookies.