The San Diego-Imperial Council is headquartered in San Diego, California, and serves youth members and volunteer leaders through Scout units in San Diego and Imperial counties of Southern California, as well as a small portion of Southwest Arizona. It is a local council (#049) of the Boy Scouts of America. They can be found online at SDICBSA.org.

Founded in 1916 as the Coronado Council, and the San Diego Council, in 1917 the two council merged to make the San Diego County Council (#049). Founded in 1922, the Imperial County Council (#029) changed its name to Imperial-Yuma Area Council in 1929, and changed the name again in 1959 to Desert Trails Council. In 1993 Desert Trails and San Diego County merged to become Desert Pacific Council. Desert Pacific Council was renamed to San Diego-Imperial Council on January 3, 2005.

Each district holds a monthly District Roundtable to provide news and training for scout volunteers relevant to their community: 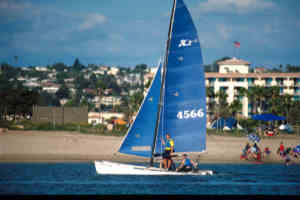 More local area camping opportunities can be found at the following:

The council is served by the Order of the Arrow Lodge 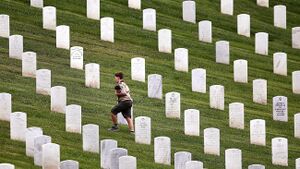 Star Scout Troy Winningham, 12 of Troop 272 walks among the gravemarkers at Fort Rosecrans National Cemetery carrying US flags to place on each of them in an annual Memorial Day service project

Order of the Arrow

Retrieved from "http://en.scoutwiki.org/index.php?title=San_Diego-Imperial_Council&oldid=47068"
Categories:
Cookies help us deliver our services. By using our services, you agree to our use of cookies.