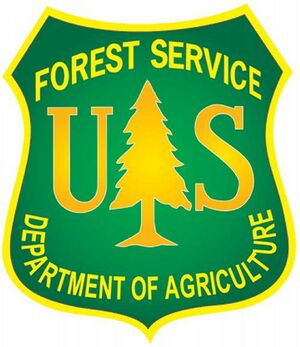 The forest is made up of two main divisions, the San Bernardino Mountains on the easternmost of the Transverse Ranges, and the San Jacinto and Santa Rosa Mountains on the northernmost of the Peninsular Ranges. Elevations range from 2,000 to 11,499 feet (600 to 3505 m). The forest includes five wilderness areas: San Gorgonio, Cucamonga, San Jacinto, Santa Rosa and Bighorn Mountain. Forest headquarters are located in the city of San Bernardino. There are district offices in Lytle Creek, Idyllwild, and Skyforest.[2]

This site was the filming location for Daniel Boone in 1936; part of the 1969 musical film Paint Your Wagon was shot here.

Much of the forest is bisected by the famous Pacific Crest Trail which runs 3000 miles from Mexican border, up the length of California, across Oregon and Washington, to the Canadian border. It provides numerous opportunities for both shorter and longer backpacking trips and high adventure training.

There are eight official wilderness areas lying within San Bernardino National Forest that are part of the National Wilderness Preservation System. Two of these extend into neighboring Angeles National Forest and three into land that is managed by the Bureau of Land Management (as indicated).

Retrieved from "http://en.scoutwiki.org/index.php?title=San_Bernardino_National_Forest&oldid=43323"
Categories:
Cookies help us deliver our services. By using our services, you agree to our use of cookies.