Resica Falls Scout Reservation is composed of Camp Firestone and Camp Big Springs, north of East Stroudsburg, Pennsylvania in the Pocono Mountains.[1] In 1955 the Philadelphia and Valley Forge Councils purchased the property jointly. The camp opened in 1957 and operated the camp together until 1965 when Valley Forge Council bought out the Philadelphia Council's interest. In 1996 the two councils merged and is now the Cradle of Liberty Council.

Originally, the reservation was to consist of six camps, each holding two hundred and fifty boys. These six camps were to be divided with three on each side of Route 402. Camp #1 was to be situated above the current Firestone Camp; Camp #2 about where Firestone Camp is now; Camp #3 where the family cabins are located, behind Bushkill Lodge. Camp #4 is now Big Spring Camp; Camp #5 was to be on top of Big Ridge; and Camp #6 was Great Bend.

Camp Firestone is currently closed because of lack of campers. Resica Falls is used heavily in the summer as a week-long summer camp for many different Boy Scout troops from all over the East Coast.

The property is now owned by the Cradle of Liberty Council and sits on 4,600 acres of undeveloped land. The camp is used by hunters and fishermen with the permission of the scouts. There is also a museum which is located on the camp that displays 19th century tannery village relics and local Native American artifacts which go back to 500 BC. 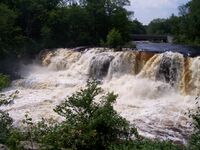 The Bushkill Creek runs through the camp and also runs into neighbor camps. The camp is also built around, and gets its name from the Resica Falls, one of the more scenic of the waterfalls in the Poconos.

In February 2006, the Natural Lands Trust completed a conservation easement on the reservation on behalf of Middle Smithfield Township, Monroe County. [2] The Pennsylvania DNCR contributed a $900,000 in grants to the project. The easement restricts development on the property ensures that an additional 1028 acres of valuable natural open space will be permanently preserved while allowing scouting activities to continue.