Redwood National and State Parks RNSP -a group of four parks, together, protect 45% of all remaining coast redwood (Sequoia sempervirens) old-growth forests on the Northern California coastline. These trees are the tallest and one of the most massive tree species on Earth. In addition to the redwood forests, the parks preserve other indigenous flora, fauna, grassland prairie, cultural resources, portions of rivers and other streams, and 37 miles (60 km) of pristine coastline. 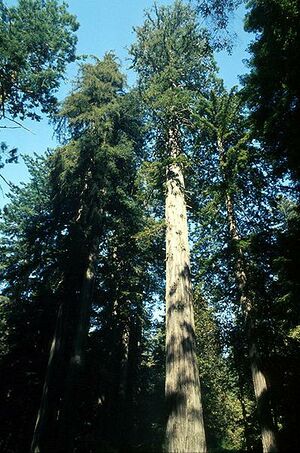 The coast redwood is the tallest tree species on Earth.

In 1850, old-growth redwood forest covered more than 2,000,000 acres of the California coast. The northern portion of that area, originally inhabited by Native Americans, attracted many lumbermen and others turned gold miners when a minor gold rush brought them to the region. Failing in efforts to strike it rich in gold, these men turned toward harvesting the giant trees for booming development in San Francisco and other places on the West Coast. After many decades of unrestricted clear-cut logging, serious efforts toward conservation began.

The ecosystem of the RNSP preserves a number of threatened animal species such as the tidewater goby, Chinook salmon, northern spotted owl, and Steller's sea lion. In recognition of the rare ecosystem and cultural history found in the parks, the United Nations designated them a World Heritage Site on September 5, 1980 and part of the California Coast Ranges International Biosphere Reserve on June 30, 1983.

The National Park Service (NPS) and the California Department of Parks and Recreation (CDPR) administratively combined Redwood National Park with the three abutting Redwood State Parks in 1994 for the purpose of cooperative forest management and stabilization of forests and watersheds as a single unit.