The pinewood derby, for half a century "a celebrated rite of spring," has been named part of "America's 100 Best" by Reader's Digest magazine.[2]

Description of the event 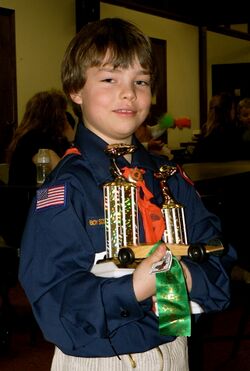 Other than the previous basic design rules, the Cub Scout is able to carve and decorate the car as he chooses. Many Cub Scouts also add weights to the final design to bring the car to the maximum allowable weight. Cars typically vary from unfinished blocks to whimsical objects, to accurate replicas of actual cars. The fastest cars tend to resemble low doorstops, with weight at the rear. Graphite is usually the only lubricant allowed, as it often helps to polish the provided nails.

The track usually has two to six lanes and slopes down to the ground as the cars are powered by gravity. Tracks may be owned by the pack or rented. The race is run in heats, giving every car the chance to run on each lane. The racers can be grouped with others from the same rank (Tiger Cubs, Wolf Cubs, Bear Cubs, etc.), or can compete against the pack as a whole. 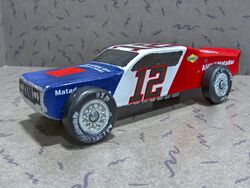 The idea behind the pinewood derby is for the parent, usually the father, but occasionally the mother or grandparent, to spend time helping the child design, carve, paint, add weights, and tune the final car. However, it is often the case that the parent takes over the construction of the car, an aspect of the event that was lampooned in the 2005 film Down and Derby. The quest for a fast car supports a cottage industry that supplies modified wheels, axles, and blocks as well as videos and instruction books. While a pinewood derby car kit costs around $4, a set of modified wheels and axles can sell for more than ten times that amount. These aftermarket items are legal under some Pack rules since the parts originally came from an official BSA kit. Complete cars can be purchased on eBay and elsewhere for around $100 to $200.[3] Although these cars violate the spirit of the event, if not the rules, enforcement can be difficult.

Cubmaster Ron Murphy organized the first pinewood derby, which was raced on May 15, 1953 in Manhattan Beach, California, by Pack 280C. Murphy's son was too young to participate in the popular Soap Box Derby races, so he came up with the idea of racing miniature wood cars. The cars had the same gravity-powered concept as the full-size Soap Box Derby cars, but were much smaller and easier to build.

In the 1980s, the design of the block was changed from a cutout block, consistent with a 1940's style front-engined Indy 500 car, to a solid block. The tires were also changed from narrow, hard plastic, to wider "slicks". Blocks can be whittled with a hand knife, but this is considered dangerous for young boys. It is usually better for a trained adult to use a band saw or Dremel carving tool for major shaping. Decals can be bought at scout shops or hobby shops. It is also possible to use standard model decals to replicate actual racing cars such as Richard Petty's 1970 Plymouth Superbird, shown at right. The original style is based on open wheel cars, however, fender or body kits are available, or wheels can simply be placed outboard of the body. 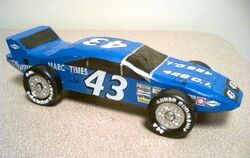 Since 1953, millions of young people have built pinewood derby cars. The competitive pinewood derby races remain very popular and are a highlight of each year in many Cub Scout packs. Similar racing activities are the raingutter regatta with boats, and a rubber band powered rocket race, or space derby.

In Canada, the equivalent is the kub kar, raced by Cubs. It uses the same basic pine block, nails, and plastic wheels kit. There are similar restrictions and guidelines for both construction and racing.

A kub kar event could also include other activities such as: rolling the car along the floor along a pre-determined path, trying to roll the car as close as possible to a target, knocking over targets, trying to pass through different sized holes, etc.

Typically, a rally will also include various awards to reward some of the Cubs for their designing skills.

While kub kars are very popular among the 8-10 year olds, younger members of Scouting can try "Beaver Buggies" while the older members can make and race pickup trucks and 18-wheelers.

Strictly speaking, only the Boy Scouts of America can organize a pinewood derby. But many other organizations hold similar functions using different names and slightly different cars. They all involve a basic pine wood block, plastic wheels, and basic axles.

The force propelling a pinewood derby car is gravity and the only opposing force is friction, therefore car modifications are aimed at minimizing the friction that occurs when the wheel spins on the axle, contacts the axle head or car body, or contacts the track guide rail. Friction due to wind resistance is a minor, although not insignificant, factor. The wheel tread can be sanded or lathed and the inner surface of the hub can be coned to minimize the contact area between the hub and body. Polishing the wheel, especially the inner hub, with a plastic polish can also reduce friction. Often one front wheel is raised slightly so that it does not contact the track and add to the rolling resistance. Axles are filed or lathed to remove the burr and crimp marks and polished smooth. More extensive modifications involve tapering the axle head and cutting a notch to minimize the wheel-to-axle contact area. A proper lubricant, typically graphite powder, is essential. Wheel alignment is important both to minimize wheel contact with the axle head and body as well as to limit the contact between the wheels and guide rail as the car travels down the track. The center of mass of a typical car is low and slightly ahead of the rear axle, which helps the car track straight as well as providing a slight advantage due to the additional gravitational potential energy.

Packs can establish additional rules for what, if any, modifications are allowed. In some areas, no changes can be made to the axles or wheels.

Retrieved from "http://en.scoutwiki.org/index.php?title=Pinewood_derby&oldid=34130"
Categories:
Cookies help us deliver our services. By using our services, you agree to our use of cookies.