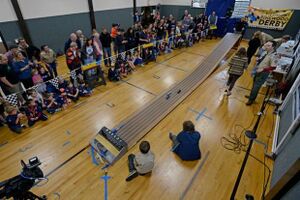 Pinewood derby is a racing event for unpowered, unmanned miniature cars. Pinewood derbies are often run by chapters (packs) of the Cub Scouts program of Boy Scouts of America. With the help of adults, Scouts build their own cars from wood, usually from kits containing a block of pine wood, plastic wheels, and metal axles. With the popularity of the pinewood derby, other organizations have developed similar events, and a small industry has developed to provide organizer equipment (e.g. tracks, timers, and scales) and awards (e.g. trophies and ribbons). Similar Cub Scouting events include the Raingutter Regatta (a race for miniature boats) and the Space Derby (a race for rubber band-driven propeller shuttles).

One of the reasons for extreme scouting popularity of Pinewood Derby (along with its brother events Raingutter Regetta and Spacewood Derby) is it's masterful combination of all five elements of STEAM education into a very fun event that involves the whole family.

Every cub pack is strongly encouraged to hold one of these events at least. Older units of Scouts, Crews and Ships are encouraged to find a creative way to so something more advanced.

The first pinewood derby was held on May 15, 1953 at the Scout House in Manhattan Beach, California by Cub Scout Pack 280C (the present Pack 713[1]). The concept was created by the Pack's Cubmaster Don Murphy, and sponsored by the Management Club at North American Aviation.[2]

Murphy's son was too young to participate in the popular Soap Box Derby races, so he came up with the idea of racing miniature wood cars. The cars had the same gravity-powered concept as the full-size Soap Box Derby cars, but were much smaller and easier to build.[3][4]

The pinewood derby had a sensational first year. Murphy and the Management Club of North American Aviation sent out thousands of brochures to anyone who requested more information. The idea spread rapidly, and competitions were held across the country, mainly with recreation departments and nonprofit organizations including the Los Angeles County Department of Recreation. Of all that early enthusiasm, however, only the Boy Scouts of America made it part of an official program.[5][6] The National Director of Cub Scouting Service, O. W. (Bud) Bennett, wrote Murphy: "We believe you have an excellent idea, and we are most anxious to make your material available to the Cub Scouts of America." Within the year, the Boy Scouts of America adopted the pinewood derby for use in all Cub Scout packs.[3]

In its October 1954 issue, Boys' Life publicized the event and offered plans for the track and a car, which featured "four wheels, four nails, and three blocks of wood."[3]

When using a kit sold through Boy Scouts of America (BSA), the Scout begins a block of wood, four plastic wheels, and four nails for axels. The finished car must use all nine pieces, must not exceed a certain weight (usually five ounces (150 grams)),[7] must not exceed a certain width (usually 2-3/4 inches (7 cm))[7] and length (usually 7 inches (17.8 cm))[7] and must fit on the track used by that particular Scout pack.

Blocks can be whittled with a hand knife, bandsaw, or a carving tool. Other than the previous basic design rules, the Cub Scout is able to carve and decorate the car as he chooses. Cars vary from unfinished blocks to whimsical objects, to accurate replicas of actual cars. Weights (e.g. coins or other bits of metal) are added to the final design to bring the car to the maximum allowable weight, to improve speed. Axel friction can be reduced by polishing the nails and applying graphite as a lubricant.

The track usually has two to eight lanes and slopes down to the ground, since the cars are powered by gravity. Tracks may be owned by the pack or rented. The race is run in heats, giving every car the chance to run on each lane. The racers can be grouped with others from the same rank (Tiger Cubs, Wolf Cubs, Bear Cubs, etc.), or can compete against the pack as a whole.[8]

The force accelerating a pinewood derby car is gravity; the opposing forces are friction and air drag. Therefore, car modifications are aimed at maximizing the potential energy in the car design and minimizing the air drag and the friction that occurs when the wheel spins on the axle, contacts the axle head or car body, or contacts the track guide rail.[9] Friction due to air drag is a minor, although not insignificant, factor. The wheel tread can be sanded or turned on a lathe and the inner surface of the hub can be tapered to minimize the contact area between the hub and body. Polishing the wheel, especially the inner hub, with a plastic polish can also reduce friction. Often one front wheel is raised slightly so that it does not contact the track and add to the rolling resistance. Axles are filed or turned on a lathe to remove the burr and crimp marks and polished smooth. More extensive modifications involve tapering the axle head and cutting a notch to minimize the wheel-to-axle contact area. Packs can establish additional rules for what, if any, modifications are allowed. In some areas, no changes can be made to the axles or wheels.[9]

A second consideration is the rotational energy stored in the wheels. The pinewood derby car converts gravitational potential energy into translational kinetic energy (speed) plus rotational energy. Heavier wheels have a greater moment of inertia and their spinning takes away energy that would otherwise contribute to the speed of the car. A standard wheel has a mass of 2.6 g, but this can be reduced to as little as 1 g by removing material from the inside of the wheel. A raised wheel can reduce the rotational energy up to one-quarter, but this advantage is less with a bumpy track.[9]

Another consideration is the track itself. A track that is mostly sloping, with little flat at the end, can allow cars with minimal mass in their wheels to shine. However, a track with a steep slope and then a long flat section can penalize such cars due to the quick loss of energy they experience once they have reached the bottom, when all potential energy has been transferred to kinetic and rotational energy. Such cars will take a lead on the downslope, but may be passed by cars with more energy "stored" away as rotational energy on the flat.[9]

A proper lubricant, typically graphite powder, is essential. Wheel alignment is important both to minimize wheel contact with the axle head and body as well as to limit the contact between the wheels and guide rail as the car travels down the track. There are 32 friction causing surfaces on a pinewood derby car. These include the surfaces of all four wheels which touch either the axle, the body or the track and the surfaces of all four axles which touch the wheel. Neglecting to polish and lubricate any of these 32 surfaces will result in degraded performance. The center of mass of a typical car is low and slightly ahead of the rear axle, which helps the car track straight as well as providing a slight advantage due to the additional gravitational potential energy.[10] 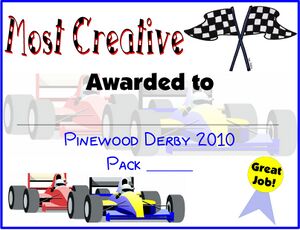 The Pinewood Derby Pack Meeting, is one of the most extraordinary events of the program year for most Cub Scout packs. It incorporates all five elements of STEAM (Science, Technology, Engineering, Arts and Mathematics). In addition to the race itself, the pinewood derby features the following activities:

Most Pinewood Derby races are held in February or March so that the event winner may register and participate in annual council scout fair.

Most Local Councils of the BSA feature a master Pinewood Derby competition at their annual scout fair limited to the grand champion of each pack. Most council races feature a strict set of rules, which the packs should follow. However any pack is free to set their own rules for their own event. These rules must be set and agreed to by the Pack Committee.

The pinewood derby was selected as part of "America's 100 Best" in 2006 as "a celebrated rite of spring" by Reader's Digest.[11] The event has also been parodied by South Park in the episode "Pinewood Derby" and in the film Down and Derby.[2]

Retrieved from "http://en.scoutwiki.org/index.php?title=Pinewood_Derby&oldid=41957"
Categories:
Cookies help us deliver our services. By using our services, you agree to our use of cookies.