Owasippe Scout Reservation (OSR), located in Twin Lake, Michigan is the resident camp operated by the Chicago Area Council of the Boy Scouts of America. It began in 1911 as Camp White on 40 acres of land on Crystal Lake donated by the White Lake Chamber of Commerce, and bills itself at the United States' longest continuously operating Boy Scout camp.[1] At its peak of use the reservation covered 11,000 acres (45 km²) and served over 10,000 Scouts per summer, but the overall decline in Scouting nationwide has seen yearly attendance fall to approximately 3,800 campers. Previous property consolidations have left the camp at 4,800 acres (19 km²) in size, and the council is now attempting to sell the camp but with stiff resistance from the local community, Scout volunteer leaders, and staff alumni. 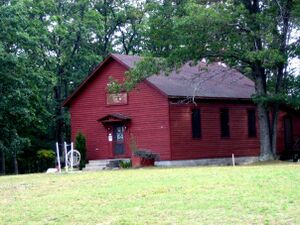 Owasippe Scout Reservation lies within the boundaries of Manistee National Forest in Blue Lake Township, Muskegon County, West-Central Michigan, and the Northeast border of the camp is formed in part by the White River.

A theme park, Michigan's Adventure, is also nearby. 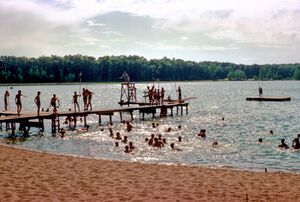 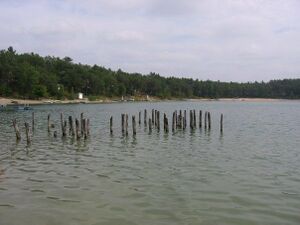 The original Boy Scout camp was established in 1911 at Crystal Lake outside Whitehall MI. Accounts differ concerning the original name with consideration being given to Camp White and Camp Owasippe. The first documented reference to Owasippe in relationship to the camp was in 1916 when Camp Master James P. Fitch originated the "Tribe of Owasippe" for those Scouts who had attended camp one or more times since 1912.

In 1912 the first of a continuing legacy of "Family Camps" was established for families visiting Scouts at camp. The accommodations were located at a farmhouse about 2 miles southwest of the camp.

In 1920 pressure was being felt by the Chicago Council for the operation of a camp for each of the Districts of the Council. In addition to the North Shore District camp on Crystal Lake camps operating for the Scouts of the other Districts included Camp Keesus at Grand Haven MI for the Hyde Park and Woodlawn Districts, Camp Checaugau at Palatine IL for the Northwest District and Camp Shabbona on the Des Plaines River in Illinois for the West Side District.

In 1922 Camp West and Camp McDonald were established at Crystal Lake MI and the original camp name was changed to Camp Beard. At that time the collective properties were known as the A. Stamford White Owasippe Scout Camps.

For most of its history, Owasippe has been an evolution of semi-autonomous section camps. It is common for each section camp to offer the standard summer camp program. However, differences in location, food preparation, and swimming accommodations contribute to the unique atmosphere of each former and current camp. Each section camp has its own cheer and at least one camp song. Each section camp has multiple program areas such as handicraft, aquatics, nature, scoutcraft, shooting sports, and adventure-patrol (first-year campers)...all supported by a campstaff of roughly 30 personnel.

Currently, Camps Blackhawk and Wolverine operate as Boy Scout camps during the summer with about 25 campsites in each of these subcamps. Camp Carlen, formerly Camp Sauger Lake, hosts a Venturing Base, while Reneker Family Camp offers programs for the families of Scout leaders while that related troop is bivouacked in camp. Camp Robert Crown is used as a base for the council's high adventure trek program, "The Manistee Quest", but is mostly mothballed. An "outpost program" is available to older campers offering unique program opportunities featuring the Diamond-O Ranch and Wrangler Outpost, Charles Nagel COPE Course Ropes Course and Christopher Hill Climbing Wall, Photography Outpost, Astronomy Outpost, J Stephen Fossett Sailing Base, and a Fishing Outpost.

The Manistee Quest is a guided off-reservation backpack and/or canoe trek program utilizing a 100-mile section of the North Country Trail that traverses the Manistee National Forest and intersecting navigable rivers. Crews of no more than 10 older Scouts and adult leaders go on a week-long excursion fully equipped with all provisions for that time frame on a wilderness route planned and organized by their youth leadership.

Camp Hiawatha Beach, while technically not a section camp, is a lone troop camp offered for those units who wish to run their own summer camp experience. 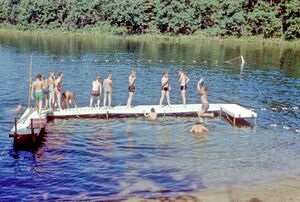 Camps which were sold off or otherwise closed include Camps Stuart, West, and Beard around Crystal Lake (sometimes referred to as Owasippe Lake); Camp Bel-Nap, and Camp Bass Lake (lone troop). Camps Wolverine North and South were combined into the current Camp Wolverine in the 1980s, and Camp Wilderness was incorporated into the current Camp Blackhawk when the latter camp was moved.

The Bass Lake lone troop Scout camp was a single camp on a small (approximately 600 feet wide) lake in the Owasippe reservation. A single troop would take over the entire camp, usually for a two week period, preparing all their own food and overseeing all aspects of the camp life. Active in the 1950s and 1960s, Bass Lake camp is no longer in use.

The traditional Owasippe Hymn is sung at the closing campfire each week throughout the summer. It was written by E. Urner Goodman.

All the wealth of Earth and Heaven,

bless thy woods and dales.

Over all thy lakes and forests, happy youth prevails.

So may Scouting's bonds of friendship seal our loyalty.

To the camp so dear to memory,

Species of note within Owasippe include the Karner Blue butterfly, Bald Eagle, Eastern Box Turtle, Blandings Turtle, and Eastern Massasauga rattlesnake. In 2002, the Nature Conservancy organized a Bioblitz to catalog the species of flora and fauna on the Reservation, and later produced a report listing the various species that were found. Owasippe is known to be one of the last locations in Michigan which hosts the Oak Savanna, a rare ecosystem, and the Coastal Plain Marsh which hosts unique flower and fauna dependent on acidic soils.

In early 2006 The Nature Conservancy further noted that the "Bio-Blitz" of 2002 was not the definitive work on the species within Owasippe. It is reasonable to assume that other species, not particularly evident during the two weekends of the "Bio-Blitz" have been missed in the accounting of species.

Staff People Of The Year