A national Scout jamboree is a gathering, or jamboree of thousands of members of the Boy Scouts of America (BSA), usually held every four years and organized by the BSA National Council. Referred to as "Jambo", or "the Jamboree", Scouts from all over the world have the opportunity to attend these jamborees, considered to be one of several unique experiences that the BSA offers. The first jamboree was scheduled to be held in 1935 in Washington D.C. to celebrate the 25th anniversary of Scouting, but was delayed until 1937. The idea of holding the event on a regular basis did not take root at first, the next jamboree wasn't held until 1950 in Valley Forge, Pennsylvania[1].

The jamborees were then held around the country as a means to promoting Scouting nationally. Since 1981, the U.S. Army has allowed the BSA to use Fort A.P. Hill, Virginia as the home location of national Scout jamborees. A jamboree is held for ten consecutive days and offers many activities for youth participants and the 300,000 members of the general public who visit it. It is considered to be Scouting at its best. 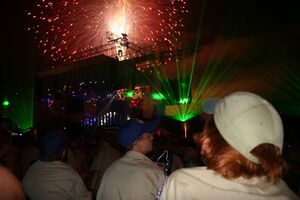 Like the BSA's national organization, the jamboree is divided into regions - Central, Western, Northeast, and Southern. Each region has at its disposal five to six subcamps, with twenty in all. Each subcamp has its own latrines, shower facilities, food commissaries, with one action center per region. Each subcamp contains a number of troops, identified by a three or four digit number depending on the location of the subcamp within the encampment. The 2005 National Scout Jamboree had 20 subcamps, identified by number and named after famous explorers (e.g.Bob Ballard, Steve Fosset, Joe Kittinger, and Will Steger.)

File:Scoutsmulticulture.jpg
Scouts from all over the country and the world showed up for the jamboree.

Going to the national Scout jamboree is an intensive and expensive process. Considering the logistics of having thousands of youth and their leaders concentrated in one area at one time, the National Office coordinates the entire jamboree process. A normal Boy Scout troop cannot petition the National Office to attend the jamboree as participants, instead, the local council establishes a jamboree committee who is charged with promoting and facilitating the experience to their members. Local council committees typically have volunteer members responsible for finance, fundraising, training, recruitment, transportation, touring while en route to the jamboree site, and other functions where appropriate.

Youth members sign up for the jamboree through an application process to the local council, who then places each boy into the jamboree troop. Large councils are granted multiple jamboree troops. Each troop comprises four adults (Scoutmaster, and three assistant Scoutmasters) and 36 youth in four traditional patrols of eight boys each, plus a leadership corps of four older boys (senior patrol leader, assistant senior patrol leader, quartermaster, and scribe). After being assigned a jamboree troop, members are given their troop numbers, a participant's patch for wear on the Scout's field uniform, and a jamboree council shoulder patch, or JSP. Training and preparation for the jamboree often begins more than a year before the actual jamboree begins. Most troops require the adult leaders to obtain Basic Scoutmaster training and Wood Badge, an intensive management training course offered by the BSA.

Before the jamboree begins, many troops visit Washington D.C. and other areas of interest near Fort A.P. Hill.

Youth and adult volunteer and professional Scouters, plus members of the military and government provide a number of services to the jamboree by being on staff. Jamboree staff are given a special hat and neckerchief as tokens of their service, plus many of the different staff groups have special patches or pins that are sought after by youth and adult participants. In addition to the regional staff that provide services in subcamps and at the regional activity centers, many other staff members work in areas that serve the entire jamboree . Staff members arrive a number of days before the jamboree begins and usually depart on the same day or several days after participants leave, depending on their assignments. Regional staff members often stay within the subcamps, while National staff members stay in barracks locations within the post itself. 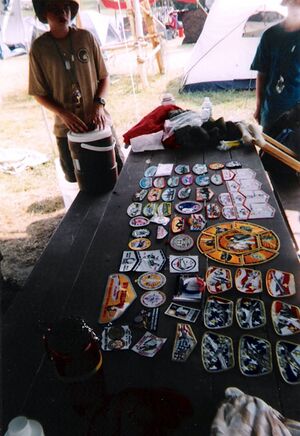 A Patch Collection from the 2005 National Scout Jamboree

Some contend that federal support for the National Jamboree is unconstitutional. For details on this controversy, see Winkler v. Rumsfeld.

Retrieved from "http://en.scoutwiki.org/index.php?title=National_Scout_jamboree_(Boy_Scouts_of_America)&oldid=34368"
Categories:
Cookies help us deliver our services. By using our services, you agree to our use of cookies.