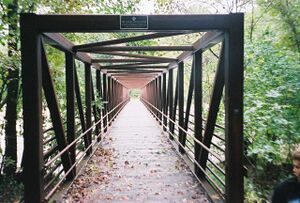 Musser Scout Reservation is a Boy Scout camp located along the Unami Creek on over 1400 acres of Marlborough Township, Pennsylvania. It is part of the largest contiguous forest in Southeastern Pennsylvania. [1] The camp is owned by the Cradle of Liberty Council.

The Reservation is made up of three distinct camps: Camp Hart, Camp Delmont, and Camp Garrison.

The Cradle of Liberty Council, Natural Lands Trust, Montgomery County Lands Trust and Montgomery County signed a conservation easement permanently protecting over 1200 acres of the Musser Scout Reservation. The easement is a perpetual, legally binding agreement to remove certain rights from the property owner. The effect of conservation easements is to provide permanent protection from future development while leaving the land in private ownership. [2]

Camp Delmont was named after the two counties that made up the original Delmont Council (DELaware and MONTgomery Counties Council, later known as The Valley Forge Council).

Summer Camp was first held there in 1916. The camp is recognized as one of the oldest Boy Scout camps in the United States. [3]

Hart Scout Reservation opened in 1930. The property was given by Dr. Charles D. Hart, and the camp was thereby named after him.

Camp Garrison was named after Walter R. Garrison, a major contributor to the building of Camp Garrison. [5]