Mount Diablo Silverado Council is a local council (#023) of the Boy Scouts of America is one of six councils that serves the San Francisco Bay area in California. The council's office is located in Pleasant Hill, California. It serves chartered organizations and BSA units in Contra Costa County, Lake County, Napa County, Solano County (except the cities of Dixon, Rio Vista, and Vacaville), and the cities of Albany and Berkeley in northern Alameda County.

In 1916 the Berkeley Council was the first council in Northern California to receive a charter from the Boy Scouts of America National Council. The Oakland-Piedmont Council followed later in 1916.[6] The San Francisco Council and also the Alameda Council followed in 1917.[5][7] The Silverado Area Council was founded in 1917 as the Napa Council, changing its name to the Napa County Council in 1922, and again in 1928 to the Silverado Area Council. The Luther Burbank Council (#034) merged into Napa County in 1927.[1]

In 2012, the Mount Diablo Silverado Council voted against a merger with the San Francisco Bay Area Council.[8] 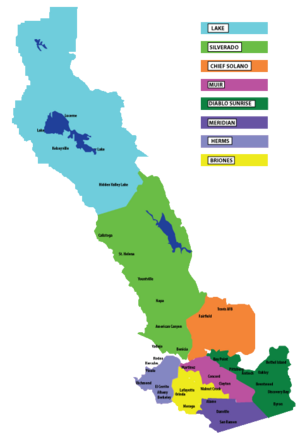 Order of the Arrow

Wolfeboro Pioneers is one the last surviving local BSA honor society in the United States that has not been absorbed by the Order of the Arrow, the others being Tribe of Mic-O-Say, Firecrafter, and Tribe of Tahquitz The Wolfeboro Pioneers is a Boy Scout camping honor society based out of Camp Wolfeboro near Arnold, California. The society was founded in the summer of 1929 by returning Scouts and Scouters who were devoted to creating and preserving the camp's unique tradition.

Retrieved from "http://en.scoutwiki.org/index.php?title=Mount_Diablo_Silverado_Council&oldid=47062"
Categories:
Cookies help us deliver our services. By using our services, you agree to our use of cookies.