Mount Baden-Powell is a peak in the San Gabriel Mountains of California named for the founder of the World Scouting Movement, Robert Baden-Powell, 1st Baron Baden-Powell. It was officially recognized by the USGS at a dedication ceremony in 1931.[1] It was originally known as East Twin or North Baldy.[2]

At 9,407 feet (2,867 m) in elevation, Mount Baden-Powell is traditionally considered to be the 4th or 5th highest peak of the San Gabriel Range; however it is the second highest peak in the range with more than 1,000 feet (300 m) of prominence, and is the highest peak not part of the Mount San Antonio massif.

The peak is within the Angeles National Forest and San Gabriel Mountains National Monument.

The summit has long been a favorite hiking excursion either from the Mount Islip Saddle near Little Jimmy Trail Camp, or the Vincent Gap Trail which leads up a moderate to strenuous set of switchbacks from Wrightwood. Mount Baden-Powell is also the high point along the The Silver Moccasin Trail, a historic 53-mile (85 km) Boy Scout hiking trail, connects this summit to Mount Burnham (less than 1 mile (1.6 km) away), Throop Peak and Mount Hawkins. The Vincent Gap hike leads through a variety of forested areas consisting of Jeffrey Pine, Ponderosa Pine, Lodgepole Pine, Incense-cedar, and an ancient forest of Limber Pine some of which are more than 2,000 years old.

In 1957 several Southern California councils of the Boy Scouts of America placed a formal marker at the summit with a plaque dedicated to Lord Baden-Powell. 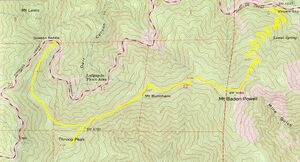