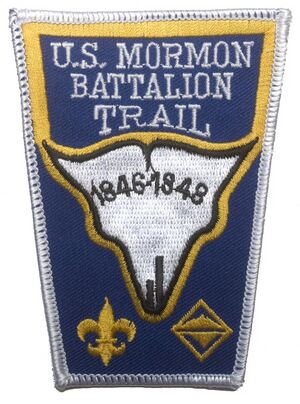 Scouts may earn from SDIC this patch by hiking a portion of the trail and completing other related requirements.

Mormon Battalion Trail is one of the Historic Trails of America. The Mormon Battalion, the only religion-based unit in United States military history, served from July 1846 – July 1847 during the Mexican–American War of 1846–1848. This volunteer unit of about 550 Latter-day Saint men was commanded by regular U.S. Army officers. During its service, the battalion made a grueling march of nearly 2,000 miles from Council Bluffs, Iowa, to San Diego, California.

The battalion’s march and service supported the eventual cession of much of the American Southwest from Mexico to the United States, especially the Gadsden Purchase of 1853 of southern Arizona and New Mexico. The march also opened a southern wagon route to California. Veterans of the battalion played significant roles in America's westward expansion in California, Utah, Arizona and other parts of the West. Today, many scout units enjoy recreating a portion of that march across the California wilderness. 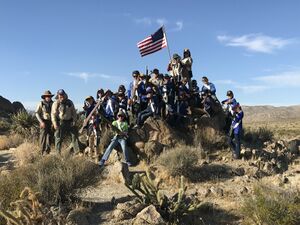 Major trailheads / wilderness adventures of the trail / can be found in these areas:

This facility is adjacent to Old Town State Historic Park - Old Town San Diego was the first European settlement on the West Coast of the present-day United States. It began with the San Diego Presidio, a military outpost of Spanish California, founded by Gaspar de Portolà in 1769. Mission San Diego de Alcalá was founded by Father Junípero Serra the same year. The Presidio and Mission were originally built on a bluff above the San Diego River, Presidio Hill, which is now the site of the city-owned Presidio Park and which is immediately adjacent to Old Town State Historic Park.

It is also located close by to two Boy Scout campgrounds in urban San Diego, Camp Balboa and Fiesta Island Youth Aquatic Center. Many scout troops attending summer camp at Fiesta Island are able to visit the Historic Center during and other nearby attractions during their mid-week free adventure day.

The Historic Trails of America Award brings appreciation to the ideals, principles, and traditions that have made our country strong. Requirements emphasize cooperation between historic societies and Cub Scout, Scouts BSA, Venturing, and Sea Scout units, which should establish a close relationship with a local society as soon as possible when planning a historic activity—most communities have such societies. Their are many options to earning this Award.

Retrieved from "http://en.scoutwiki.org/index.php?title=Mormon_Battalion_Trail&oldid=49185"
Categories:
Cookies help us deliver our services. By using our services, you agree to our use of cookies.