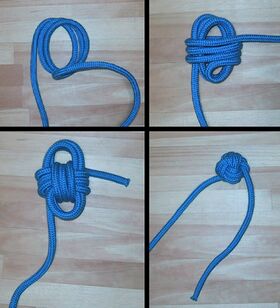 A monkey's fist or monkey fist is a type of knot, so named because it looks somewhat like a small bunched fist. It also looks somewhat like a volleyball. It is tied at the end of a rope to serve as a weight, making it easier to throw the line, and also as an ornamental knot. It can also be used as a weapon or as a tool in rockclimbing as an anchor, by stuffing it into a crack.

The knot is usually tied around a small weight, such as a stone, marble, tight fold of paper, or a piece of wood.

Monkey's Fists were also commonly used as melee weapons by sailors embroiled in street and tavern fights during the 1800s and the use of the Monkey's Fist as a flail or slungshot became common in the street gang subcultures of the 1800s.

1. Start by wrapping the rope around four of your fingers.
2. Once there are three wraps, remove your fingers and wrap it three times around the three lengths where your middle and ring finger were.
3. Then make three more turns by passing the end of the rope inside the first set of turns but outside the second set.
4. Finally, insert the weight and tighten the rope.


In addition to its nautical role, it can be used as a keychain or as cufflinks.

Because of its use as a lifeline thrown from boat to boat, this knot was adopted as a symbol of solidarity among the hobo community.

The three coils of cordage in a Monkey's fist form in effect a set of Borromean rings in three dimensions. 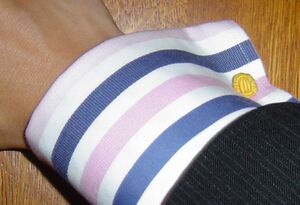 This French cuff is fastened with gold-colored Monkey's fists.

Retrieved from "http://en.scoutwiki.org/index.php?title=Monkey%27s_fist&oldid=35948"
Categories:
Cookies help us deliver our services. By using our services, you agree to our use of cookies.