Mission San Luis Rey de Francia is a former Spanish mission in the city of Oceanside, California. The mission was founded on June 13, 1798 by Padre Fermín Lasuén, and was the eighteenth of the Spanish missions established in California. Named for Saint Louis, the mission lent its name to the Luiseño tribe of Mission Indians. 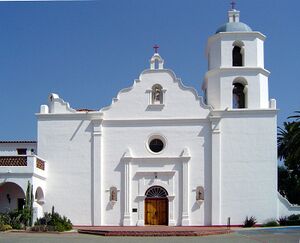 The current church, built in 1811, is the third church on this location. It is a National Historic Landmark, for its pristine example of a Spanish mission church complex. Today the mission complex functions as a parish church of the Diocese of San Diego as well as a museum and retreat center.

Back in the day, San Luis Rey De Francis Mission raised about 26,000 cattle as well as goats, geese, and pigs.

The first Peruvian Pepper Tree (Schinus molle) in California was planted here in 1830, now iconic, widely planted, and renamed the California Pepper tree in the state. After the Mexican secularization act of 1833 much of Mission San Luis Rey de Francia land was sold off. During the Mexican-American War in Alta California (1846–1847), the Mission was utilized as a military outpost by the United States Army.

This mission is an important marker on two early Historic Trails of America:

Retrieved from "http://en.scoutwiki.org/index.php?title=Mission_San_Luis_Rey&oldid=49015"
Categories:
Cookies help us deliver our services. By using our services, you agree to our use of cookies.