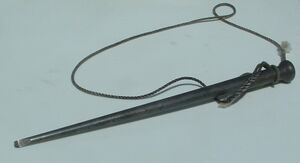 Marlinspike (sometimes marlin spike, marlinespike, or the archaic marlingspike) is a tool used to unlay rope for splicing, or to untie knots. A marlinspike is basically a polished cone tapered to a rounded point, usually 6 to 12 inches long, although sometimes 26" or longer, depending on what ply and size of rope they are intended for. The marlinspike is a tool made from metal, usually iron or steel, differentiating it from the fid which is similar in shape and function but made from wood or bone. The marlinspike may be a separate tool or one item on a pocket knife. For splicing, the marlinspike is inserted into laid rope and levers open a strand to form a hole, thereby allowing larger items to be inserted into the lay.

Marlinspikes may be required to untie knots that tighten up under tension. A very tight knot becomes impossible to pick apart without the spike, which may be slipped between the various pieces of line. Sailors also use a marlinspike as a small lever.

Sailors who become quite proficient at knot tying, sewing, and using of the marlin spike can be known as marlin spikes, or marlin spike seamen. The body of knowledge that includes knotting and splicing is called marlinespike seamanship.

The word marlinspike comes from the verb to "marl", which refers to the practice of "marling", or winding small diameter twine called marline onto larger ropes.

It also shares its name with the marlin, but has no word origins associated with the fish.

Marlinspikes are also used for the splicing of ropes in bell ringing.

Retrieved from "http://en.scoutwiki.org/index.php?title=Marlinspike&oldid=23734"
Category:
Cookies help us deliver our services. By using our services, you agree to our use of cookies.