From ScoutWiki, For Everyone, Everywhere involved with Scouting and Guiding...
Jump to navigation Jump to search
For other uses, see Map (disambiguation). For the acronyms, see MAP and MAPS

A map is a simplified depiction of a space which highlights relations between components (objects, regions) of that space. Most usually a map is a two-dimensional, geometrically accurate representation of a three-dimensional space; e.g., a geographical map. More generally, maps can be devised to represent any local property of the world or part of it, or any other space, such as the brain (see Brain mapping).

File:Starmap1600.jpg
A celestial map from the 17th century, by the Dutch cartographer Frederik de Wit.

The science and art of map-making is cartography; see that page for further discussion of the history of maps and map-making.

Map-making dates back to the Stone Age and appears to predate written language by several millennia. One of the oldest surviving maps is painted on a wall of the Catal Huyuk settlement in south-central Anatolia (now Turkey); it dates from about 6200 BC. [1] One who makes maps professionally or privately is called a cartographer.

While we tend to think of maps today as products of a rationalistic, scientific world-view, maps also have a mythic quality. Pre-modern maps, and mapping traditions outside the Western tradition, often merge geography with non-scientific cosmography, showing the relationship of the viewer to the universe. Medieval "T-O" maps, for example, show Jerusalem at the centre of the world, and in some cases related the "body" of the Earth to the body of Christ. By contrast, navigational (or "Portolan") charts of the Mediterranean from the same period are remarkably accurate. Even today, maps can be powerful rhetorical tools beyond their purely practical value, and this has been the source of much fruitful map criticism over the last twenty years, notably in the works of J.B. Harley, Mark Monmonier, and Denis Wood. 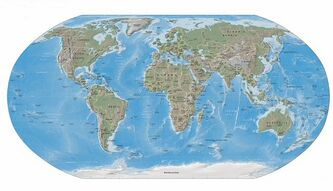 Physical map of the Earth.

Geographic maps are abstract representations of the world. It is, of course, this abstraction that makes them useful. Lewis Carroll made this point humorously in Sylvie and Bruno with his mention of a fictional map that had "the scale of a mile to the mile". A character notes some practical difficulties with this map and states that "we now use the country itself, as its own map, and I assure you it does nearly as well". This concept is elaborated in a one-paragraph story by Jorge Luis Borges, generally known in English as "On Exactitude in Science".

Road maps are perhaps the most widely used maps today, and form a subset of navigational maps, which also include aeronautical and nautical charts, railroad network maps, and hiking and bicycling maps. In terms of quantity, the largest number of drawn map sheets is probably made up by local surveys, carried out by municipalities, utilities, tax assessors, emergency services providers, and other local agencies. Many national surveying projects have been carried out by the military, such as the British Ordnance Survey (now a civilian government agency internationally renowned for its comprehensively detailed work). 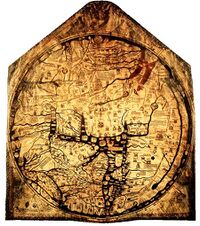 The Hereford Mappa Mundi, about 1300, Hereford Cathedral, England. A classic "T-O" map with Jerusalem at centre, east toward the top, Europe the bottom left and Africa on the right.

The most common cartographic convention is that North is at the top of a map. This is far from universal, however:

Many but not all maps are drawn to a scale, allowing the reader to infer the actual sizes of, and distances between, depicted objects. A larger scale shows more detail, thus requiring a larger map to show the same area. For example, maps designed for the hiker are often scaled at the ratio 1:24,000, meaning that 1 of any unit of measurement on the map corresponds to 24,000 of that same unit in reality; while maps designed for the motorist are often scaled at 1:250,000. Maps which use some quality other than physical area to determine relative size are called cartograms.

A famous example of a map without scale is the London Underground map, which best fulfils its purpose by being less physically accurate and more visually communicative to the hurried glance of the commuter. This is not a cartogram (since there is no consistent measure of distance) but a topological map that also depicts approximate bearings. The simple maps shown on some directional road signs are further examples of this kind.

In fact, most commercial navigational maps, such as road maps and town plans, sacrifice an amount of accuracy in scale to deliver a greater visual usefulness to its user, for example by exaggerating the width of roads. With the end-user similarly in mind, cartographers will censor the content of the space depicted by a map in order to provide a useful tool for that user. For example, a road map may or may not show railroads, and if it does, it may show them less clearly than highways.

Some maps such as topographical maps show constant values such as average temperature, these are often represented, along with other characteristics, depending on the scale of the map, in the form of Isolines. Isolines are often on a map or chart along which there is constant value (temperature, pressure, or rainfall).

Maps of the world or large areas are often either 'political' or 'physical'. The most important purpose of the political map is to show territorial borders; the purpose of the physical is to show features of geography such as mountains, soil type or land use. Geological maps show not only the physical surface, but characteristics of the underlying rock, fault lines, and subsurface structures.

Airplane pilots use aeronautical charts based on a Lambert conformal conic projection, in which a cone is laid over the section of the earth to be mapped. The cone intersects the sphere (the earth) at one or two parallels which are chosen as standard lines. This allows the pilots to plot a great-circle route approximation on a flat, two-dimensional chart. 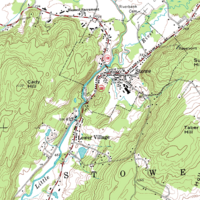 From the last quarter of the 20th century, the indispensable tool of the cartographer has been the computer. Much of cartography, especially at the data-gathering survey level, has been subsumed by Geographic Information Systems (GIS). The functionality of maps has been greatly advanced by technology allowing, for example, the superimposition of spatially located variables onto existing geographical maps. Having local information such as rainfall level, distribution of wildlife, or demographic data integrated within the map makes for more efficient analysis and better decision making. In the pre-electronic age such superimposition of data led to Dr. John Snow discovering the cause of cholera. Today, it is used by agencies as diverse as wildlife conservationists and militaries around the world.

Even when GIS is not involved, most cartographers now use a variety of computer graphics programs to generate new maps.

Interactive, computerised maps are commercially available, allowing users to zoom in or zoom out (respectively meaning to increase or decrease the scale), sometimes by replacing one map with another of different scale, centred where possible on the same point. In-car satellite navigation systems are computerised maps with route-planning and advice facilities which monitor the user's position with the help of satellites.

From the computer scientist's point of view, zooming in entails one or a combination of:

Retrieved from "http://en.scoutwiki.org/index.php?title=Map&oldid=49830"
Categories:
Cookies help us deliver our services. By using our services, you agree to our use of cookies.