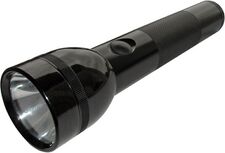 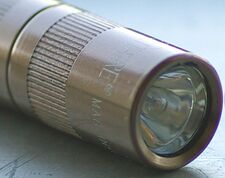 Closeup of a Maglite (Solitaire model)

Maglite (also known as MAGLITE, MAG-LITE) is a brand of flashlight created by Mag Instrument, Inc. of Ontario, California (founded by Anthony Maglica), and was first introduced in 1979. Constructed principally of 6061 aluminum, an aluminum alloy sometimes referred to as aircraft aluminum, the flashlights are renowned for their durability and continuence of manufacturing exclusively in the USA. The durability trait has long been a major selling point of Maglite advertising. One Maglite commercial features a tractor-trailer truck driving over a black D-cell Maglite, followed by the driver stepping out and discovering the Maglite still functioning.

Today, the Maglite family of flashlights has a large set of accessories, ranging from belt holsters, vehicle clamps, and auxiliary colored and glass lenses, to attachable fiber optics extensions and a bewildering array of higher-powered incandescent bulbs and LED modules. The accessories are developed and marketed both by Mag Instrument, Inc. and by numerous third-party vendors.

Many police officers carry Maglites, as they are durable, focusable, and generally produce better output than inexpensive mass market flashlights. However in recent years police departments have been adopting more expensive, higher performance "tactical" flashlights from companies such as Surefire and Streamlight. 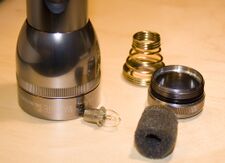 A signature feature of a Maglite is its spare bulb. Most Maglites are equipped with a spare light bulb encased in the tailcap, making replacement of a burned out bulb convenient.

The small and compact 2xAAA MiniMaglite

Maglites are manufactured in the following varieties which differ chiefly by the quantity and size of batteries required:

There is also a rechargeable Maglite, called the MagCharger: a larger more expensive model popular with public safety and emergency-services personnel. This light is much brighter than typical Maglites, and uses a rechargeable NiCad battery pack. 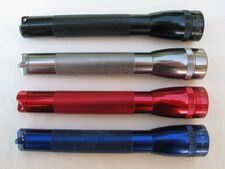 Some of this popularity can be contributed to corporations including the AA Minimags as part of employee uniforms or order custom painted Minimags as employee gifts that in some cases become the aim of collectors. Additionally in some cases Mag Instruments paired it's AA and AAA models with Swiss Army knives and sponsored BoyScout Editions available in BSA product catalogs.

Maglites have also drawn a number of private collector's and often releases models with special paint schemes. Some of which being the pink AA Minimag, the no-knurl pink AA, the no-knurl pewter AA, and various Nascar models and patriotic sets. There are also some models that are mass produced, but not readily available. The pink AA is only available at some Walmart locations, no other retail outlets, aside from collector outlets. Jade colored D-cell models, for instance, are fairly rare, as well as some sizes of camouflage. Certain colors of 4, 5, and 6 D-cell Maglites can also be difficult to find. Most of the models are rare for the simple fact that most public retailers don't stock them. Some collectors believe certain items should be standard equipment with Maglites, such as the available glass lenses, which are not offered in any retail packages.

It should be noted that the camouflage maglite is unique in that it's the only maglite with an entirely different paint formula, which is actually much more easily damaged - it feels similar to a latex based paint.

Due to their size, shape, mass, and hardness, the larger C- and D-cell Maglites are also useful as ersatz batons, and in the past a handful of law-enforcement agencies have even trained officers in the use of Maglites as weapons. Security personnel (who often must carry flashlights in the course of their work) and private citizens have also used their lights as relatively effective mêlée weapons in self-defense.

The popularity of large flashlights such as the Maglite as a weapon in law enforcement has diminished in recent years, following the availability and widespread adoption of collapsible batons. Many agencies and departments, in an effort to improve law enforcement's public image by appearing less aggressive and militaristic, discourage or outright prohibit the carrying of rigid batons, either the straight, "billy club" style or the side-handled model (known as the PR-24), under routine circumstances. Flashlights such as the Maglite became popular for their benign, functional appearance, yet still allowed personnel to effectively escalate the level of force used in violent encounters without resorting to firearms. Such activity may appear problematic or impossible with some Maglite models, such as the "Mini Maglite" and "Maglite Solitaire". The Mini Maglite is often used in place of a pocket stick, kubaton, or yawara. 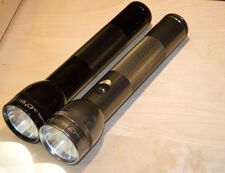 The popular 2D Maglite equipped with a factory-installed Luxeon LED

Maglite announced and began selling their first light-emitting diode (LED) lights in early 2006 but did not list the products until Early October. LED flashlights are more efficient at lower output levels than incandescent bulbs, and are also more resistant to physical shock. LEDs also have a longer lifespan than incandescent bulbs and can last for 10,000 hours of use or more. [1] Third-party LED upgrade kits for a number of different models had existed for some time previous. The only apparent downfall being the LED models emit light so evenly that it does not focus like a typical Minimag. [2]

The current line of Maglites with factory-installed LEDs are equipped with a 3-watt Luxeon light source and feature a patented power management system designed to balance optimal light output with extended battery life. The MAG-LED line also features a head design which is tapered slightly more than its incandescent counterparts, in order to accommodate a focusing system adapted for the light distribution pattern of an LED. In keeping with tradition, the D-cell models include a "spare" Krypton incandescent bulb in the tailcap, giving the user the option of switching to incandescent light if they so choose, or in the event the LED malfunctions. [3]

Maglite makes a Xenon bulb (bi-pin socket) upgrade for Maglite C and D models, which costs between $2-$4 and is available at most retail stores. The Xenon bulb is slightly whiter than the standard Krypton bulbs.

Maglites are warranted against defects for a lifetime. Until recently all Maglites were required to be register with Mag Instruments after purchase to ensure future warranty coverage. Current retail packages do not contain registration documentation as before. Prior to the release of the LED AA models, serial numbers were only stamped on D cell models, likely for law enforcement tracking purposes. The LED AA models recently released are also stamped with serial numbers. It's unclear whether the new serials are related to the lack of warranty documents in the packaging.

Maglite warranty registration is still possible through a web page on the Maglite official website. [4]

Retrieved from "http://en.scoutwiki.org/index.php?title=Maglite&oldid=34166"
Categories:
Cookies help us deliver our services. By using our services, you agree to our use of cookies.