A Kudu horn is a musical instrument made from the horn of the Kudu antelope. It is mostly seen as in the Western world in its use as a part of the Scouting movement's Wood Badge training program which, when blown, signals the start of a Wood Badge training course or activity. A form of it is sometimes used as a shofar in Jewish ceremonies. 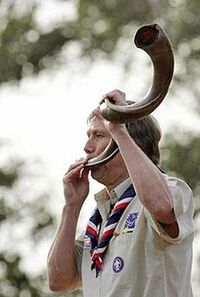 The Kudu are two species of antelope:

The name of the animal was imported into English in the 18th century from isiXhosa iqudu, via Afrikaans koedoe.

Retrieved from "http://en.scoutwiki.org/index.php?title=Kudu_horn&oldid=37505"
Category:
Cookies help us deliver our services. By using our services, you agree to our use of cookies.