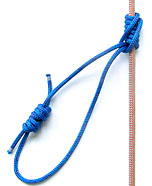 The Klemheist knot (or Machard knot) is a type of friction hitch, used as part of a system to ascend or descend a climbing rope. As with other friction knots, it grips the rope when weight is applied and is free to move when the weight is released. It is similar in function to the Prusik knot and the Bachmann knot which has the advantage over the prusik that a loop of webbing can be used as an alternative to cord. The Klemheist tends to be easier to slide up than a Prusik, but does not work well with webbing.

A Prusik loop is wrapped round the climbing rope two or three three times. The loop is then threaded through itself and carefully tightened to wrap the climbing rope neatly. In use strain must only be taken on the hanging loop. Never grip and pull on the knot itself - a rapid descent can occur! If the knot slips when load is placed on the hanging loop, wrap the loop around the climbing rope another time or two as necessary until there is no slippage. Instructions for tying a Klemheist knot, a Prusik knot and a Bachmann knot may also be found on the Chockstone link below

NB: Sometimes the knot name is misspelled 'Kleimheist'--extra "i". ("Klem" I believe means "clamp" or ... in German; the general class of knots seems to be "klemmnoten".

Retrieved from "http://en.scoutwiki.org/index.php?title=Klemheist_knot&oldid=49663"
Categories:
Cookies help us deliver our services. By using our services, you agree to our use of cookies.