The Kindred of the Kibbo Kift was a youth organisation in England from 1920 to 1951.

It was founded by the charismatic John Hargrave (White Fox), artist, author and Boy Scout Commissioner for Woodcraft and Camping, who had become disenchanted with the increasingly militaristic tendency in the Scout movement after World War I.

He was promptly expelled from the Scouts by Baden-Powell, and with a small group of like-minded, dissident, anti-war Scoutmasters and Scoutmistresses under his own direct leadership, set about building an alternative and very different movement. Baden-Powell expelled Hargrave with extreme reluctance, and only after some wealthy backers had threatened to withdraw funding from the Scouts unless he was expelled. [1]

The Kibbo Kift (archaic Kentish dialect for "proof of great strength") has been described as "The only genuine English national movement of modern times" and was certainly very different from Baden-Powell's Boy Scouts. 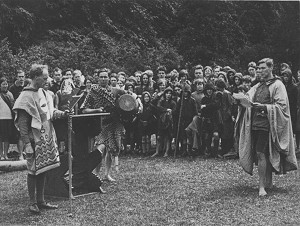 Kinsmen in ceremonial robes at the opening ceremony of the 1927 Althing, the Kibbo Kift annual general meeting.

Based on the woodcraft principles of the naturalist Ernest Thompson Seton that had been a key part of the early Scout program, the Kibbo Kift was to be not merely a youth organisation but was to involve all ages and, very daring for the times, it was open to both sexes. The ideas of world peace and the regeneration of urban man through the open-air life replaced the nationalism and militarism Hargrave had detested in the post-World War I Scouts.

Kinsmen and women were organised in Clans, Tribes and Lodges. Each individual took a Native American-style woodcraft name. The correct costume had to be hand-made by each individual or 'rooftree' (family group) and while the everyday 'habit' of Saxon hood, jerkin, shorts and long cloak must have seemed outlandish enough in the English countryside of the early 1920s; for ceremonial occasions, brilliantly coloured surcoats or silk-embroidered robes were worn by the various office-holders such as the Tallykeeper, Campswarden, Ritesmaster and Gleeman. Hargrave himself was 'Head Man' and his leadership was dynamic, inspirational and frankly autocratic.

The Kibbo Kift's central activities of hiking and camping were refined and elevated to the level of a spiritual exercise. The weekend Tribal Camps and the great annual 'Althing' were marked by colourful and impressive ritual, Native American in inspiration, but couched in language reminiscent of the Norse Sagas and rich in Saxon archaisms. Kinsmen were not only required to make their own lightweight one-man hiking tents (the first seen in this country) but to decorate them with vivid, symbolic designs of their own devising. Influenced by Hargrave's own artistic taste, an ultra-modern 'futurist' style of design became general, and the robes, regalia, tents and other items of decorative art, often of an extremely high standard, represent an extraordinary 'democratisation' of the avant-garde art of the day. 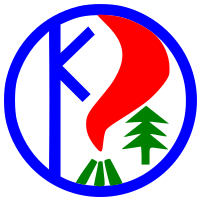 The Mark of the Kibbo Kift Kindred is typical of the symbolism that can be seen in many of their designs. Its meaning is: Worship (The K sign) Forever (the Circle of Unity and Eternity) Life (the Flame) through Knowledge (the Tree). Or again, ‘Worship Life Forever with Knowledge’.

Small in number, never more than a few hundred strong, the Kibbo Kift was nonetheless quite widely known and admired. Kinsmen and Kinswomen included the Suffragettes Emmeline Pethick Lawrence, Mary Neal and May Billinghurst, the journalist Henry Nevinson and the photographer Angus McBean. The Advisory Committee included such names as Havelock Ellis, Maurice Maeterlinck, the Bengali poet Rabindranath Tagore, H.G. Wells and Professor Julian Huxley. D. H. Lawrence took an interest in the Kindred and it has been suggested that Mellors in Lady Chatterley's Lover is based on an archetypal Kinsman.

The growth of the Kibbo Kift was not without its setbacks. In 1924, the South London co-operative lodges challenged Hargrave’s leadership, and ceded from the movement. They went on to establish their own organisation, The Woodcraft Folk, which outlived its parent organisation and still exists today. This was largely the result of the attempt by Ramsay Macdonald's Labour Party to compel the Kibbo Kift to become the youth wing of the Labour Party. When Hargrave refused to be so constrained, a Labour Party member, Leslie Paul, led a breakaway movement, the Woodcraft Folk. [2]

As early as 1922, Hargrave had become interested in the ideas of Social Credit. These were first put forward as early as the First World War in The New Age, a magazine which, under the radical leadership of A R Orage, enjoyed an influence out of all proportion to its circulation. [3] In the second half of the 1920s, Hargrave became progressively more preoccupied with the works of C.H. Douglas and his startling, iconoclastic, and radical economic theory of Social Credit. In 1931, the Kibbo Kift transformed itself into a propaganda machine of a politico-economic movement and activity was now to be centred on the industrial cities. Again, the movement was split from top to bottom, but by 1932, the transformation was complete. Gone were the Anglo-Saxon costume, camping, hiking and woodcraft to be replaced by military uniform, marching and propagandising. Gone also was the name, replaced by the populist Green Shirt Movement for Social Credit, and later by the Social Credit Party of Great Britain.

However, other historical forces were at work. The Public Order Act 1936 that banned the wearing of uniforms by political groups was a great setback for a movement that relied on agit-prop, but it was World War II that provided the deathblow. The world moved on, and the organisation was finally officially wound up in 1951. An attempt was made to relaunch it but the people of Britain preferred to adopt alternative economic remedies. Social Credit as an active movement is dead in Britain, though vestiges of its ideas have entered many mainstream British political parties, particularly the Liberal Democrats and the Green Party.