Jamboree 2008 was developed as "an Inter-organisational & International event" which was intended to "bring 600 young people from Scouting and Guiding together — to develop skills & friendships that will lay the foundations for the next 100 years of Scouting".[1] The Jamboree was set up to be independent of Associations, and hoped to involve members of the World Federation of Independent Scouts (WFIS), the World Organization of the Scout Movement (WOSM), and the World Association of Girl Guides and Girl Scouts (WAGGGS).

Jamboree 2008 was held at Green Carts, Humshaugh, Northumberland and ran for eight days, between 16 and 22 August. The final day marked 100 years since Robert Baden-Powell met thirty Scouts at Fourstones Railway Station (about a mile south of Carr Edge) and marched them up to the camp site for the Humshaugh Camp, accepted as the first official Scout Camp to be run by Baden-Powell.[2]

Jamboree 2008 was established to be an event allowing young people from all the uniformed youth movements, including the Boy's Brigade, to work together whilst celebrating the centenary of the Humshaugh Camp[3] The Jamboree was established independent of any Association, and was intended to be open to members of all Scouting organisations[4]. It was hoped that the specialist training given to volunteer leaders would continue to have an impact on the wider movement. It was also intended to highlight how Scouting has developed to meet the needs and interests of today's young people. Another intention was for the jamboree to develop links between the different Scouting organisations.[5]

The event was attended by Scouts from many parts of the United Kingdom and from Portugal.[6][7][8] The majority of the attendees were from the Baden-Powell Scouts' Association, with local members of The Scout Association choosing to mark the centenary through a display in a local town rather than attending the event. Although the Scout Association decided not to support the event,[9] they also did not issue a blocking statement, so a number of SA members attended.[10]

Jamboree 2008 was proud to host the President of the Baden-Powell Scouts' Association, Lawrie Dring, one of the founding members of the BPSA and of WFIS. Johnny Walker — the author and publisher of the Scouting Milestones website also attended the event, bringing a display of memorabilia and giving talks on Scout history..

The event also welcomed a number of volunteers from outside of Scout organisations — these included friends, family and colleagues of the organisers and participants of The Duke of Edinburgh's Award. In line with the event's Child Protection policy, all adults were checked for their suitability to work with children by the Criminal Records Bureau. 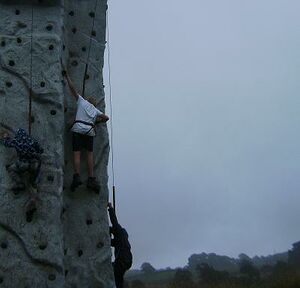 Despite heavy rainfall, the event proved a success[11] by allowing the participants to access all manner of traditional Scouting activities including:

The Jamboree was divided into four hubs. These were named after patrols created by Baden-Powell at his camp, Bulls, Kangaroos, Ravens and Wolves.

In addition to a week long event, Jamboree 2008 embarked upon a training scheme which enabled the participating adult volunteers to access a number of training schemes including:

These qualifications were then utilised for the Jamboree 2008 camp itself. The goal of the training scheme was to develop a lasting legacy beyond the camp itself.

The Jamboree 2008 project was set up as a not-for-profit event and so costs were intentionally kept to a minimum. This enabled the cost of the camp to be £50 per person for the week including all memorabilia and access to all events. In addition to this, centralised catering was made available for a cost of £37.50 per person for the week. The event aimed to be as inclusive as possible by keeping these costs as low as possible.

The project received additional funding from the following organisations:

The event itself generated substantial media interest including various local and regional newspaper acticles[10]. The BBC 1 Look North Regional News spent the day at the campsite and filmed a midday and evening feature[14] covering the Jamboree. In addition to the news presenter partaking in the activities alongside the Scouts, the weather forecast also took place from the water-logged campsite.

The Jamboree 2008 project was supported by the following companies:

Retrieved from "http://en.scoutwiki.org/index.php?title=Jamboree_2008_(Northumberland)&oldid=38215"
Categories:
Cookies help us deliver our services. By using our services, you agree to our use of cookies.