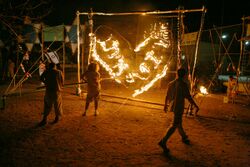 In 2009, Tzofim celebrated its 90th birthday. To mark the occasion, Israel's Prime Minister Benjamin Netanyahu met members of Tzofim at his office, where he told stories of his youth in the Modi'in troop in Jerusalem. [2]

Tzofim is a non-political organization but upholds Zionist and Jewish values. Scout troops in Israel have always been coeducational. The federation in Israel consists of Jewish, Muslim Arab, Christian Arab, and Druze troops.[1] Tzofim is open to everyone regardless of race, color, creed, or socio-economic standing. Israeli scouts come from all sectors of Israeli society.

The Israel Scouts are divided into six regional hubs: Jerusalem, Central, Sharon, South, North, and Tzabar (North America). The scout troop is called a shevet, or tribe. In the large cities, there may be several clubhouses in different neighborhoods. Most towns and kibbutzim also have scouts dens.

There are two advanced scouting programs: The Wood Badge, held every 4 years for adult scouts, and the Aryeh Croch Israeli Scouting Badge, held annually for 11th and 12th grade scouts. Most of the federation's programs and activities are held in the Scouts Ranch in the north of Israel. Tzofim runs a special project for children with physical and mental disabilities called Broshim (Evergreens). Tzofim maintains an active partnership with the German Verband Christlicher Pfadfinderinnen und Pfadfinder, including exchange visits by leadership delegations and international events.

The members of the federation are:[3]

Retrieved from "http://en.scoutwiki.org/index.php?title=Israel_Boy_and_Girl_Scouts_Federation&oldid=49656"
Categories:
Cookies help us deliver our services. By using our services, you agree to our use of cookies.