Hunter's bend, also known as Rigger's bend, is a knot used to join two lines. It consists of 2 interlocking overhand knots. The knot can jam under moderate strain. It is topologically similar to the Zeppelin bend (or Rosendahl bend).

Hunter's bend is one of the most recent knots to be discovered. It appeared on the front page of the London Times in 1978 and was credited to Dr. Edward Hunter. Dr. Hunter used it for years to tie broken shoelaces before discovering its originality through a friend in the 1970s. When it appeared on the front page, it led to much publicity for the knot and also to the foundation of the International Guild of Knot Tyers. However, the knot was presented in a Knots for Mountaineering by Phil Smith ca. 1956. 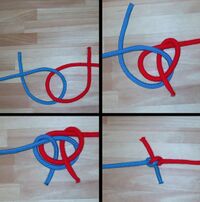 hunter's bend step by step
Retrieved from "http://en.scoutwiki.org/index.php?title=Hunter%27s_bend&oldid=28643"
Categories:
Cookies help us deliver our services. By using our services, you agree to our use of cookies.